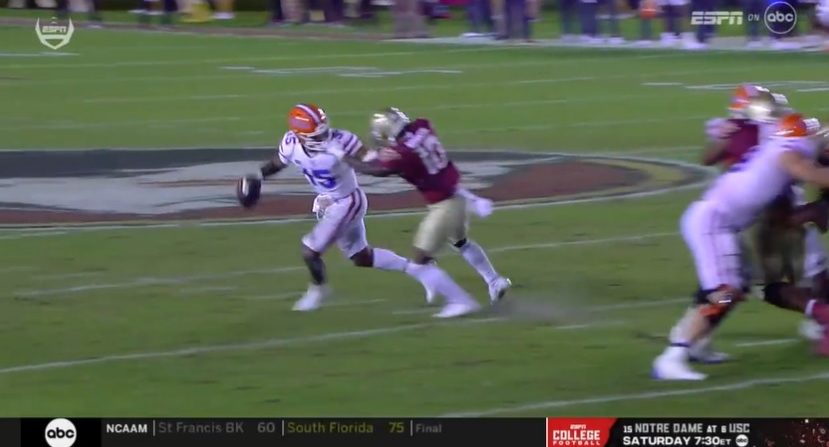 Florida State’s football team snapped a three-game losing streak against their rivals, the Florida Gators on Friday. It was an exciting 45-38 victory that featured multiple momentum swings and big plays. It also included some referee controversy, especially on Florida’s ultimately unsuccessful final drive.

If there’s a good thing about the controversies, both teams benefited from one. Initially, it was the Gators.

An incomplete pass from Florida’s Anthony Richardson on fourth down seemed to lock up a victory for the Seminoles. Only, Florida State’s Jarques McClellion was controversially flagged for pass interference, extending the drive.

It looked like Florida State had locked up victory. But… pic.twitter.com/a8UVjsdCqE

The good vibes between the Gators and the officials didn’t last long, though.

Florida drove the ball deep into Florida State territory but again needed to convert on fourth-and-long to extend the game. The Seminoles brought pressure, which Richardson managed to escape. But after breaking away from a sack, he couldn’t pull off any more magic. His pass fell harmlessly incomplete, with one of his teammates anywhere near the ball.

Bua t closer look at the near sack shows that Florida State’s Jammie Robinson appeared to grab Richardson’s facemask before the quarterback broke away.

Florida State wins. Anthony Richardson does a great job avoiding a sack but doesn't have anyone to throw to. And this time, the Seminoles might have benefited from the refs. pic.twitter.com/UOJItodZwX

We’ve seen more blatant facemask calls missed this year. Still, that should have been called.

That’s an atrocious miss of a face mask call. Wow.

The referees are making their presence felt on this drive.

Total botch job against both teams on this final drive

Obvious facemask lmao , what a joke.

You don’t throw a flag there. Terrible pass interference call. Let the players determine the outcome of the game.

Why have officials if they are going to miss that obvious facemask?

But they were able to see a non-existent pass interference a few minutes earlier. Clown show.

What’s unfortunate is that the focus should be squarely on the players. Florida State’s Jordan Travis had an otherworldy performance. Richardson and the Gators, meanwhile, were offensively inept through in the third quarter but managed to tie the game in the fourth quarter with two touchdowns.

Ultimately, though, these calls/no-calls from the officials will be talked about and remembered just like those great plays were.