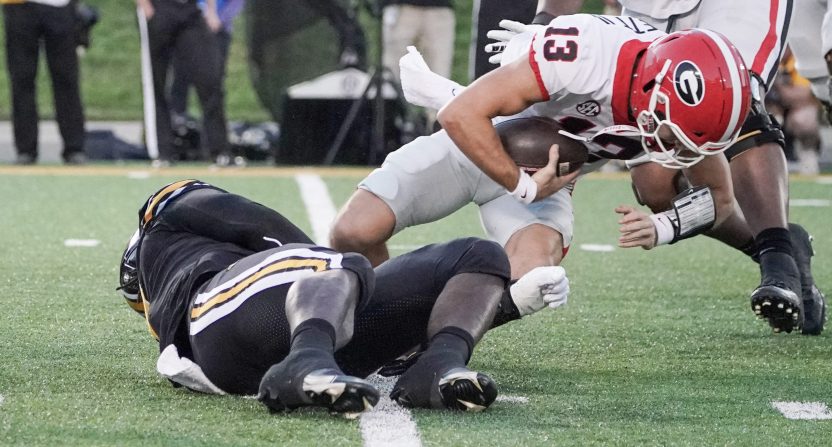 While Georgia was coming off of a less than overwhelming win against Kent State, there wasn’t much doubt that the Bulldogs were the best college football team in the country heading into Saturday’s game against Missouri. After two quarters, that has changed.

Georgia didn’t simply struggle against the unranked Tigers, who entered Saturday at 2-2. The Bulldogs were vastly outplayed. Missouri opened up a 13-0 win and while Georgia did finish the first half on a positive note with a field goal as time expired, the Tigers still led the Bulldogs 16-6 at halftime.

This is not something that Georgia has experienced much of — particularly in the Kirby Smart era.

This is the second time Georgia has trailed to an unranked opponent by double digits under Kirby Smart.

The other game? Smart's 1st SEC game as Georgia head coach in 2016… at Missouri pic.twitter.com/0Vo305zBre

The surprising first half left the Bulldogs visibly frustrated.

Things are getting heated on the Georgia sideline as they trail Missouri 10-0 👀pic.twitter.com/4vwcR9Jk5o

Others in the college football world reacted to the shocking first half.

all the stuff that happened against Kent State.

Mizzou watched the film and made Georgia do all the same stuff again https://t.co/Qy19xuujtO

Somebody take Georgia out of the Nintendo and blow in the cartridge.

Does #1 Georgia know they have a game tonight against Missouri?

What’s interesting is that as bad as things have been for Georgia, they could be worse. After the Bulldogs finally got on the board, Missouri’s Cody Schrader nearly scored on a 63-yard run, getting tripped up just before he could cross the goal line.

Mizzou is bringing it vs No. 1 Georgia! 🏈 pic.twitter.com/k02O7at0SV

The Tigers then tried to play fast and in the process, committed a false start. From there, the Missouri offense stalled and Harrison Mevis was called upon to kick his third field goal of the first half.

Between that and the late field goal of their own, the Bulldogs did manage to take some momentum into the locker room at halftime. But they’re still in a lot of trouble. And perhaps worse than that, other, better SEC teams are no doubt watching this game and seeing Missouri exploit Georgia’s weaknesses and wondering if they can do the same.