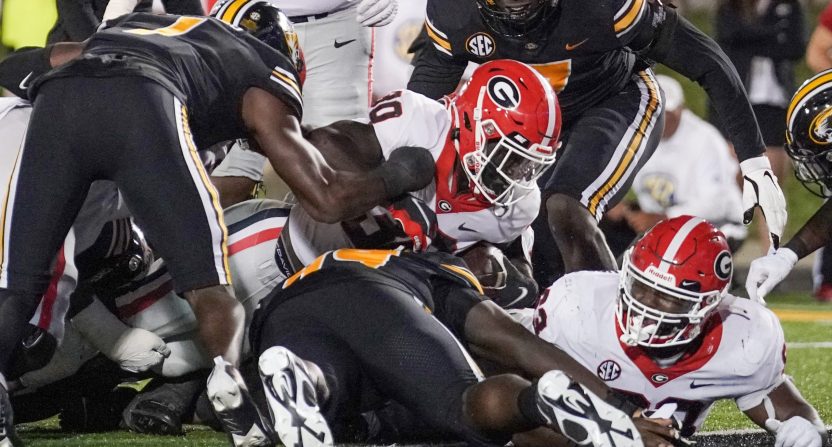 One week after struggling to beat Kent State, the top-ranked Georgia Bulldogs were in even more trouble against their SEC rivals, the Missouri Tigers. Georgia trailed Missouri by 10 at halftime and the Tigers remained ahead for most of the second half. Through it all, though, the Bulldogs left Faurot Field with what they came for — a victory.

Missouri received the second-half kickoff but went three-and-out. The two teams then swapped field goals over the next four possessions, giving the Tigers a 22-12 lead early in the fourth quarter. Georgia took over from there, though. The Bulldogs scored their first touchdown of the game on a 10-play, 75-yard drive. That included a gutsy decision to go for it from inside of the Missouri five-yard line, eschewing the short field goal to close the gap to seven.

After forcing another punt, Georgia went right back on the attack. The Bulldogs went on a seven-play, 68-yard drive. A one-yard touchdown run from Daijun Edwards gave Georgia its first lead of the game.

No. 1 Georgia takes a 26-22 lead — its first lead of the game — over Mizzou with just over 4 minutes remaining. 🏈 pic.twitter.com/XlxdG3s7c8

That was enough. The Bulldogs got the ball back and ran the rest of the clock out, with Edwards picking up a first down with a seven-yard run to put the game on ice.

No. 1 Georgia escapes with a 26-22 win over Mizzou. 🏈 pic.twitter.com/XfobOtsZqI

The college football world had mixed feelings about Georgia’s performance. For some, it was the sign of a great team showing its mettle in a tough spot. For others, it was the No. 1 team in the country and defending national champion needing a significant comeback to defeat an unranked opponent.

Last season No. 1 Alabama played a game like No 1. Georgia did tonight, on the road, at night, against an unranked opponent… and lost.

Georgia in all likelihood grew up a lot tonight, especially in that fourth quarter. #GoDawgs

me, when Georgia squeaks it out in Missouri pic.twitter.com/i5Qljgz8gh

Kirby Smart on composure and resiliency: "We had to OD on those tonight."

Give Missouri a lot of credit for the way it played after losing a game in quite possibly the worst way possible. Ultimately, Georgia owned the fourth quarter.

Georgia will definitely need to start playing a lot better. Tough games loom on the schedule. That includes rivalry games like Florida and a potentially upstart Georgia Tech team. The Bulldogs will also start November with a three-game stretch against presently ranked Tennessee and Kentucky, with a road game against Mississippi State game sandwiched between them.

If the last two games for Georgia were more than just typical growing pains, we’ll find out pretty quickly.