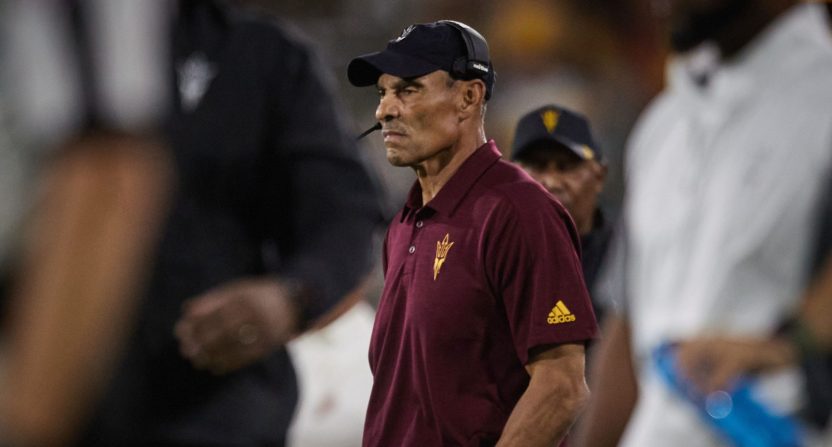 Arizona State announced late Sunday afternoon that head coach Herm Edwards will “relinquish his role” as the football coach of the Sun Devils by mutual consent.

According to Chris Karpman at 247 Sports, The team’s other coaches were told in a meeting that Edwards would no longer be coaching the team. Players were told later that the school decided to part ways with Edwards.

Edwards’s record with the Sun Devils was 26-20, but what did him in was quite possibly the 30-21 loss to Eastern Michigan Saturday night, which was his final game as head coach.

As of now, no interim head coach has been named.

The reaction around the college football world has been one that isn’t much of a surprise. Edwards may have been fired for reasons the public didn’t know about until now but for the second time within a week, a head college football coach has been sacked in the early part of the season.

Herm Edwards fired as Arizona State's coach. "At the core of this is doing what is best for our current team, staff & university," ASU AD Ray Anderson said. "I understand the frustrations out there. We must do better & that starts w/our decision today"

If ever there was a moment to drop this “parted ways” cliche, it’s when you:
A) Fire your FB coach after week 3
B) He just lost to Eastern Michigan
C) He got the school under a fairly massive NCAA investigation

If fired after the season, Herm Edwards would be owed ~$7.4 million.

But that's without cause.

An NCAA investigation could get Arizona State off the hook from their stupid hire and stupid extension.https://t.co/qYkYipYzyV