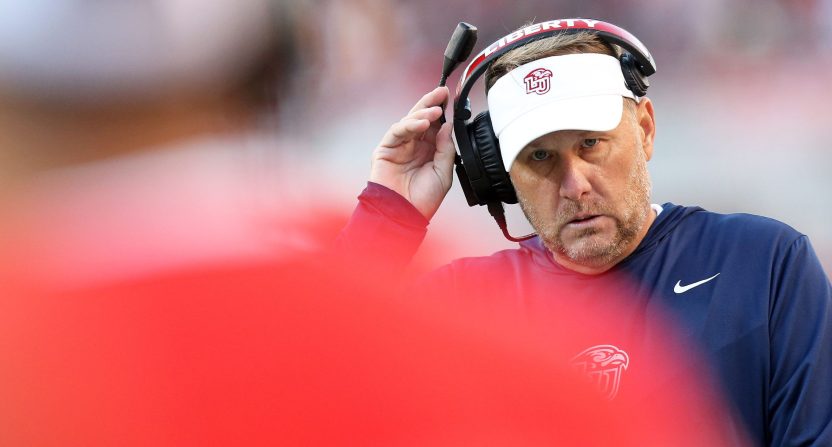 According to reports on Saturday morning, Liberty Flames head coach Hugh Freeze is the frontrunner to become the new head coach of the Auburn Tigers. However, by Saturday afternoon, all anyone wanted to talk about is how bad Freeze’s current team looks and why an SEC program would be interested in him.

Sources: Auburn has been in discussion with Hugh Freeze for weeks about him becoming Auburn's next coach. They won't make a formal offer until after the Iron Bowl, but they've informally discussed contract and numbers with him for more than week.

Hugh Freeze told Liberty officials he's in conversations with Auburn, but has not informed LU yet he's leaving, sources told @ActionNetworkHQ. Liberty preparing to do search for its next coach, sources said

The Flames have been a strong program under Freeze in the past few seasons, going 8-5, 10-1, and 8-5 the last three years. They took an 8-3 record into Saturday against a lowly New Mexico State squad that was 4-6. Given that the Flames had dropped their two previous contests to UConn and a struggling Virginia Tech, it would be assumed that they’d try to bounce back in their final game of the year before heading into bowl season.

That was not been the case as the Aggies thoroughly dominated the Flames on the day, winning 49-14. And it sounds like the Liberty fans have also turned on Freeze, who has done little to make them think he’s still got his mind on them.

Meanwhile, the college football world, which already doesn’t think too much of Freeze as a person, had some strong thoughts on the way his time with Liberty is coming to an end, not to mention how he’s a “perfect fit” for Auburn.

Hiring a head coach is like buying a house. Hiring a coach who's on a three-game losing streak to UConn, the husk of Virginia Tech, and NMSU would be like buying a house, if that house had already fallen into a sinkhole and had been squatted by a colony of orks

This is loud quitting and I respect it https://t.co/kH1uaAPzwh

ditching Cadillac Williams for Hugh Freeze is like finding $1000 you forgot was hidden in your sock drawer and immediately using it to buy crypto https://t.co/ZQA87Qnywp

If you had any doubts that Hugh Freeze is the man for Auburn, he’s proving he can play from behind pic.twitter.com/jNfWjaU8Xo

God is in control ✋ pic.twitter.com/ctBtbhofJ6

Good luck with all that, Auburn.