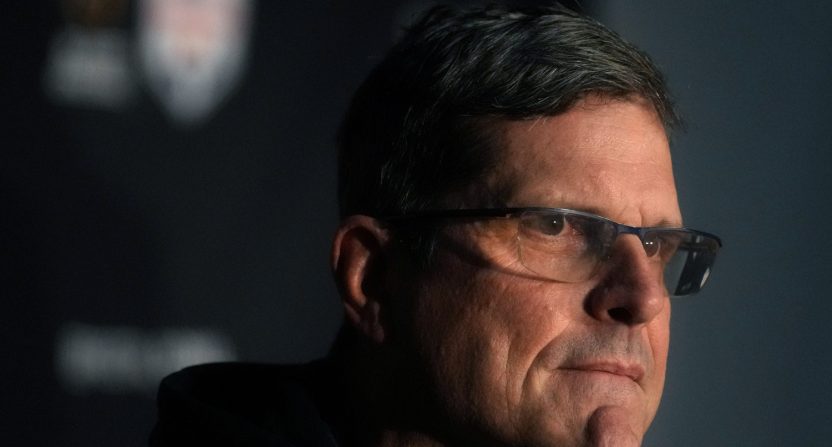 Michigan Wolverines’ head coach Jim Harbaugh has long been known for interesting takes and references, from steak and milk to potato chips in a PB&J to “biblical” quarterback battles to love for Blue Bloods, Judge Judy, The Rockford Files, and Ted Lasso. Even by his standards, though, Harbaugh (seen above answering media questions after arriving in Phoenix with his team on Dec. 26) may have out-Big Tenned himself with what he chose as introductory music at a pre-Fiesta Bowl/CFP semifinal press conference Thursday:

Jim Harbaugh just arrived to his Fiesta Bowl press conference with "The Wreck of the Edmund Fitzgerald" as his walkup song.

For those unfamiliar with Harbaugh‘s choice, Gordon Lightfoot’s 1976 “The Wreck of the Edmund Fitzgerald,” here it is in its entirety:

Lightfoot’s song, about the sinking of the titular ship in a November 1975 storm on Lake Superior, is extremely renowned in the Great Lakes area (on both sides of the U.S.-Canada border). And not just by Harbaugh. Here are just a few of the many tweets from over the years showcasing that:

muting the kentucky basketball game coverage to listen to Wreck of the Edmund Fitzgerald on repeat for the last 8 minutes pic.twitter.com/JVVcChxreD

And this month’s winter storms, and the record waves on the Great Lakes, have seen it brought up even more than usual:

Boy I'd hate to be carrying a load of iron ore 26 thousand tons more than my ship weighed empty https://t.co/toiuAN8SjC

I was gonna listen to a podcast on the drive up to my sister’s, but might have to switch to sea shanty’s and Wreck of the Edmund Fitzgerald https://t.co/HaKiK7NeBn

Am I crazy or does this sound like a dubstep cover of “Wreck of the Edmund Fitzgerald”? https://t.co/pw1ZCWuLzJ

Another notable angle with this song is how people have made a point of playing it at bars:

Ok, ketchup on Pizza sucks. But playing The Wreck of the Edmund Fitzgerald on a bar jukebox kicks tail. pic.twitter.com/B2IyqF1gYc

When “The Wreck of the Edmund Fitzgerald” drops at the bar pic.twitter.com/iY6jot5eQM

I can’t believe you can 1. Use an app to play music at a bar you’re not at 2. Choose a DJ name for the app 3. Play The Wreck of the Edmund Fitzgerald as many times in a row as you care to. pic.twitter.com/220xulxxC9

If you want to kill a vibe in a bar The Wreck of the Edmund Fitzgerald is the best song.

This does not apply if you sing karaoke with it in a bar in Marquette, MI. 😂😎

At least Harbaugh did not use one particular kind of Edmund Fitzgerald entrance:

Why do people love The Wreck of the Edmund Fitzgerald so much? Some of it may be the man-versus-nature conflict, a regular theme for those in the Great Lakes region. But writer Tommy Tomlinson is one of those who have argued for its storytelling magic. Here’s some of what he wrote in an excellent 2013 post on the song at Harvard’s Nieman Lab of Journalism. (Song lines in quotations, Tomlinson’s own comments outside them.)

“The legend lives on, from the Chippewa on down, of the big lake they called Gitche Gumee. The lake, it is said, never gives up her dead when the skies of November turn gloomy.” Right away you get sweep and scope. Lightfoot plants the story in history. And when it comes to a literary hook, “The legend lives on” is right up there with “Once upon a time.”

“With a load of iron ore 26,000 tons more than the Edmund Fitzgerald weighed empty, that good ship and true was a bone to be chewed when the gales of November came early.” He even has a nut graf! It’s not explicit, but you know the gales of November did something bad to a very big ship. That’s enough—and better than revealing everything up top.

…”Does anyone know where the love of God goes when the waves turn the minutes to hours?” This is the second-level nut graf—not the topic of the story, but the meaning of the story. I’d like us to stop for a second to admire that sentence. That’s one hell of a sentence. That’s the universal aspect any great story should push for. It’s also the seed of a thousand dissertations in divinity school.

We may not yet know exactly why Harbaugh went with The Wreck of the Edmund Fitzgerald as intro music. But this is an extremely Michigan Man move, and one that adds to the own legend living on that is Harbaugh.