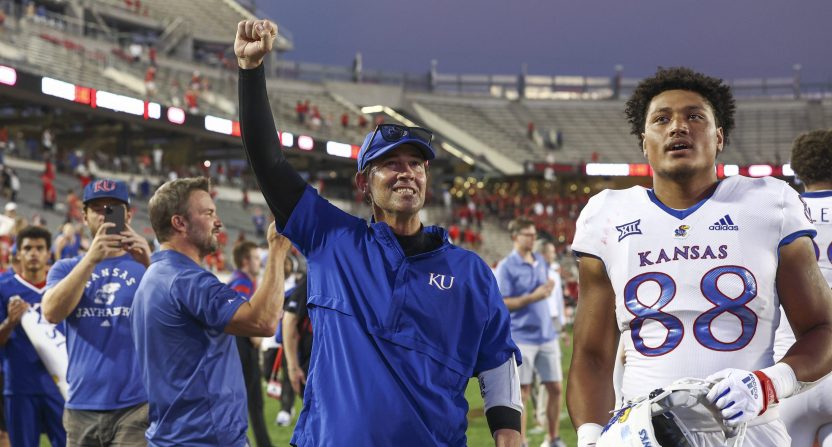 The Kansas Jayhawks are off to a great start this year… in football!

Kansas went on the road and took down the Houston Cougars 48-30 on Saturday.

The Jayhawks are now 3-0. And that’s a pretty huge deal when considering that they last won over three games in 2009 (when they went 5-7 under Mark Mangino), and when they last had a winning record in 2008 (8-5 under Mangino).

After Kansas went 2-10 in 2021 under first-year Jayhawks head coach Lance Leipold (he was the Buffalo head coach in 2015-20), he has them making huge strides in year two.

The Kansas offense has particularly been spectacular, averaging 53 points over the three games (the Jayhawks entered this week with the highest scoring average in the country at 55.5 points per game).

The Jayhawks were 8.5-point underdogs in Saturday’s 18-point victory in Houston, and they were 14-point underdogs in last week’s 55-42 win at West Virginia. They haven’t just been pulling off surprising upsets; they’ve been doing so in convincing fashion.

The college football world has had a lot of praise for the Jayhawks, and there have also been many jokes about this basketball powerhouse finally looking like a quality football program. Additionally, college football fans are asking ESPN to take College GameDay to Lawrence.

Here’s a sampling of what’s being said on Twitter about the upset victory and 3-0 start for Kansas:

ESPN College GameDay for Football will go to Lawrence for the first time ever next week to see 3-0 Duke take on 3-0 Kansas*!

* they haven’t committed yet but if they don’t we riot!

For the first time in college football history Kansas, Kentucky, UNC, and Duke have started the season 3-0 💯

Lance Leipold is a wizard

Both Kansas and Vanderbilt have already surpassed their preseason win totals @CaesarsSports. Both teams were set at 2.5