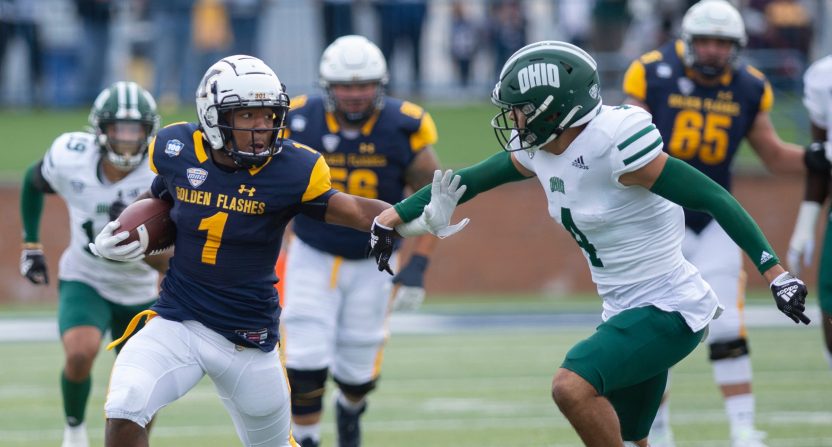 Kent State followed up its competitive loss against No. 1 Georgia with a 31-24 overtime win over Ohio in the first conference game of the season for the Mid-American Conference rivals. Running back Marquez Cooper and receiver Dante Cephas had a big hand in the win for the Golden Flashes. In fact, the duo was historic for Kent State.

The Golden Flashes relied heavily on Cooper, giving him the ball 40 times. Two of those touches resulted in scores, the game’s first touchdown as well as the game-winning touchdown in overtime. Cooper delivered beyond that, though, rushing for 240 yards. Kent State quarterback Collin Schlee also depended heavily on Cephas. The receiver caught 13 passes, including a game-tying touchdown early in the fourth quarter. All told, he earned 246 yards with those 13 receptions.

One player had amassed 240 yards rushing while his teammate had 240 receiving yards. If that sounds like a tremendous and rare achievement, it is. Before Saturday, it had never been done in the history of FBS (FKA Division I-A.).

Update: Kent State is the first team in FBS HISTORY to have a 240-yard rusher and a 240-yard receiver in the same game. https://t.co/RNMYzbtQO2

The college football world had some interesting reactions to the history-making teammates.

And the #Iowa #Hawkeyes cannot get 240 yards of total offense https://t.co/FVVJ9cZHWR

Indeed, Kent State coach Sean Lewis was a trendy name when the season began, largely seen as a guy who could fill a vacancy at a bigger school. This will do nothing to hurt that reputation. While their 2-3 record would say otherwise, the Golden Flashes have largely played well this season. Kent State’s record is more a product of a phenomenally difficult schedule as anything else; the Golden Flashes have losses to Washington, Oklahoma, and Georgia.

With this kind of production on offense, Kent State should be a tough team to play as the MAC season gets going.