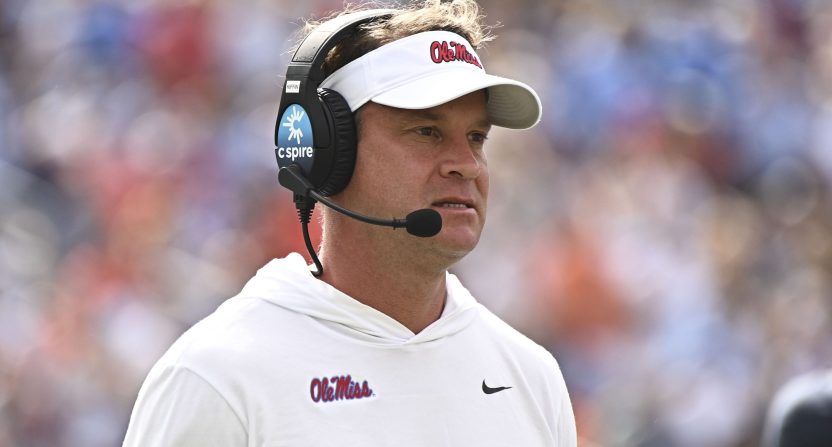 There has been much speculation as to who will be the next head coach for the Auburn Tigers after the team parted ways with Bryan Harsin earlier this season. Ole Miss head coach Lane Kiffin has been rumored to have interest in the program, and a shocking report emerged on Monday that suggests he may be leaving for Auburn sooner rather than later.

According to Jon Sokoloff of WCBI News in Mississippi, Kiffin is expected to step down as head coach at Ole Miss as soon as Friday to eventually join another SEC school, the Auburn Tigers.

BREAKING: #OleMiss HC Lane Kiffin plans to step down as the Rebels coach Friday and head to Auburn to become the Tigers next head coach, according to sources

Sources say the Tigers haven’t officially offered the job to anyone yet.

So Lane to Auburn is happening. Story soon.

It would certainly be shocking for Kiffin to leave the Ole Miss program in the middle of the season, which is causing confusion and disbelief around the college football world.

If this is true then future Iron Bowl games are gonna to be fun https://t.co/2yf4crBND6

Lane Kiffin is only 47 years old and he's already been head coach of the Raiders, Tennessee, USC, Florida Atlantic, Ole Miss and now, reportedly, Auburn. What a crazy career this man has had. https://t.co/30wSzHDd3t

We're already to this point in the season lmao https://t.co/XQRGjaQC0p

I love the idea of Lane Kiffin becoming the head coach of every Power-5 school in the country. https://t.co/tAokyUOWEQ

This report comes as Ole Miss prepares to face off against in-state rivals Mississippi State in the annual “Egg Bowl”.

If this report on Kiffin is true, he certainly has not hinted at it whatsoever on his social media page. He posted a picture on Monday prior to this report of him reading a book about the history of the Egg Bowl.

The possibility of Kiffin joining Auburn is extremely intriguing for a number of reasons.

Kiffin would have a ton of work on his hands to turn Auburn’s football program around.

Auburn is currently 5-6 on the year, and would suffer its second losing seasons in as many years if Alabama defeats the Tigers on Saturday.