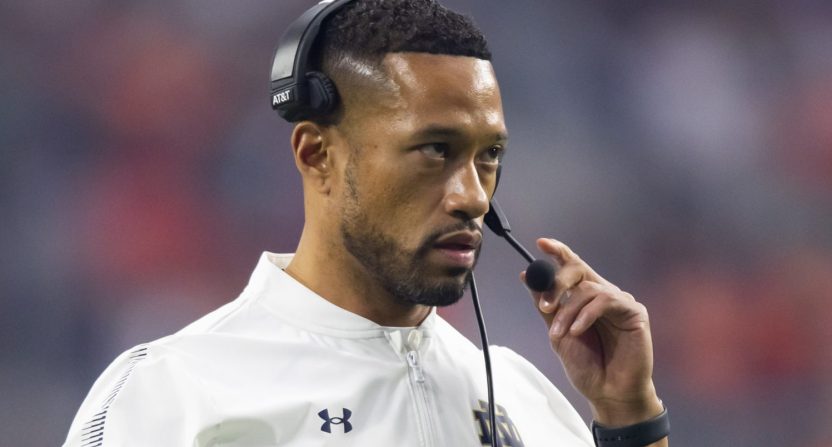 Marcus Freeman probably did not envision his Notre Dame Fighting Irish head coaching career starting like this. The season-opening loss to the Ohio State Buckeyes in Columbus was understandable. The following week’s loss at home to the Marshall Thundering Herd was less so. That game cost the Irish their starting quarterback, Tyler Buchner, after the former four-star prospect suffered a grade 5 AC sprain in his non-throwing shoulder

Freeman and the Irish, however, received a divine boost in preparation for this week’s game. The Catholic church announced that earlier this week, the first-year coach had received his First Holy Communion and officially joined the church.

“Welcome to our newest Catholic, Marcus Freeman,” the graphic reads. “Friar Bill recently concelebrated in a Mass where Marcus Freeman was received into the Catholic Church. After preparing with Friar Nate Willis, C.S.C, chaplain of the Notre Dame football team, Marcus made a profession of faith, was confirmed and received his First Holy Communion.

“Please pray for Marcus, and his family, as they celebrate and continue this journey in faith!”

The Fighting Irish are next in action on Saturday against the University of California when they host the Golden Bears at Notre Dame Stadium in South Bend, Indiana. The Irish are 11-point favorites.