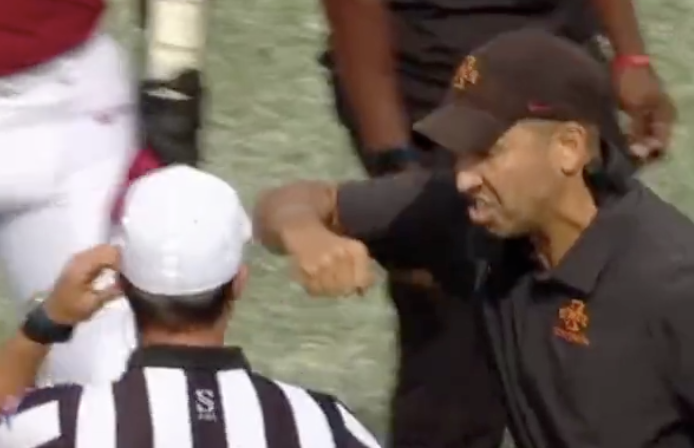 Iowa State Cyclones head coach Matt Campbell certainly does not have a reputation as a hot-headed coach that regularly screams at referees. Campbell is typically seen as mild-mannered and level-headed during games. But he absolutely lost his cool on the refs during Saturday afternoon’s game against the Baylor Bears.

During the second quarter of Saturday’s game, Iowa State appeared to stop Baylor on third down, but then Cyclones cornerback Anthony Johnson was flagged for an illegal block below the waist. The controversial call gave Baylor a first down and extended their drive, ultimately allowing them to score a touchdown.

It was quite a controversial call in a pretty massive moment. And as a result, Campbell went absolutely ballistic on the referees.

Campbell’s reaction went viral around the college football world. And while the reaction was split between those condemning Campbell for losing his cool and those validating Campbell’s frustration, many seemed to agree that Campbell was right to protest the call – even if he did go a little overboard.

Any rational reasonable human being reacted that way about that call
it was horrid https://t.co/Ryu8UEgDTZ

In what other profession can you berate someone else like this and it’s completely acceptable? https://t.co/jCjkCNqA4m

Matt Campbell just ran through all 7 stages of grief in about 20 seconds.

It was mostly denial, anger, and bargaining, thoughpic.twitter.com/HyHqRNCHqx

“Just how displeased he is”

I would say he’s definitely more than displeased 😅 https://t.co/H6Ri6EL1N7

Campbell’s outburst ultimately didn’t change the call and didn’t appear to swing the momentum in Iowa State’s direction. Still, it probably felt good to get all of that off his chest.