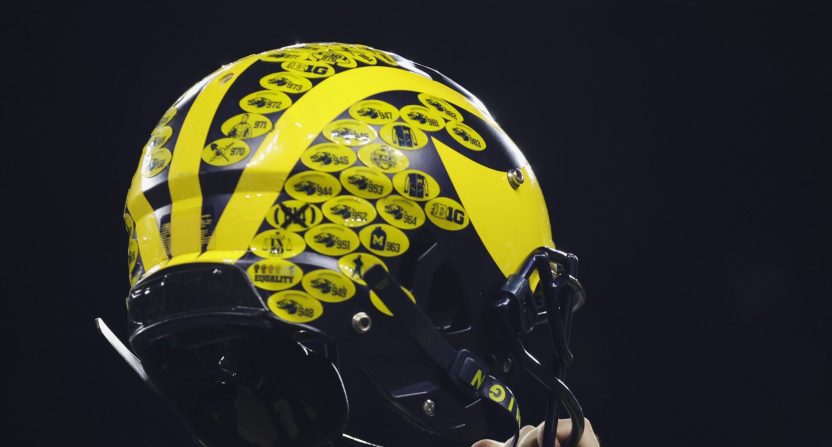 The controversial tunnel at the Big House is getting a makeover. Michigan announced that the tunnel at Michigan Stadium will be expanded in the offseason.

Austin Meek of The Athletic wrote, “The University of Michigan will remove seats from its football stadium to widen tunnel access to the field on game days” in a report published Monday. The renovation project comes on the heels of several incidents, including an ugly one that occurred last October.

According to the report from The Athletic, the athletic department went through a safety review at the conclusion of this season. “Forty-five seats will be eliminated, but standing room availability is set to grow, keeping the stadium capacity at 107, 601” according to the report.

The Big Ten reprimanded the program earlier this year after they deemed that they failed to protect personnel on both sides after the incident occurred. So, the tunnel renovation seems to be a direct response from the athletic department to the reprimand and criticism.

Meek wrote that after the safety review they “determined that eliminating the moveable seating round the tunnel entrance will provide more space between fans and team personnel entering the field.”

The CFB world reacted to the tunnel news after it trickled out.

Really wonder how this will affect the Michigan Marching Band’s tunnel entrance https://t.co/HRsesqbTjh

I don’t think the tunnel was the issue

But it is pretty funny that Michigan came out and said the tunnel wasn’t the issue yet their actions are suggesting that the tunnel was problematic and potentially the issue https://t.co/8YlpGnqiIO

In an admission that all their defense of it didn’t make sense, the University of Michigan has announced that they are making changes to the tunnel through which players enter and exit the field at Michigan Stadium

Ohio State, Michigan State, and Penn State- “The Tunnel is the problem.”

Also Michigan- “We are expanding the tunnel.”

So apparently “the tunnel made me do it” is now a valid excuse for bad behavior. https://t.co/yTU2avUL3C