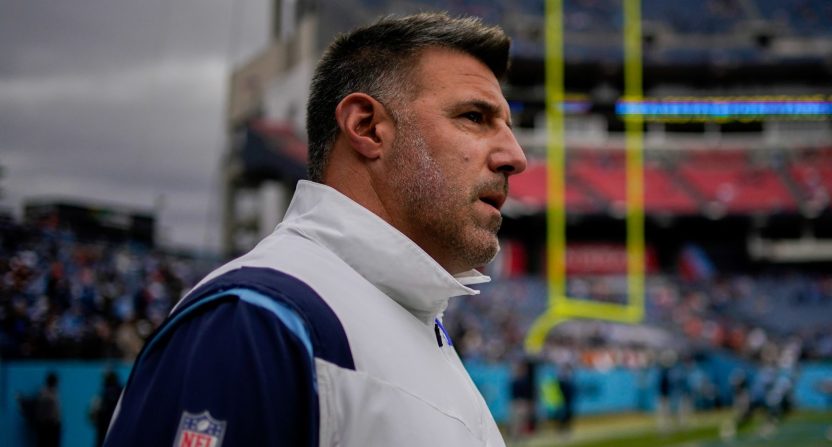 It’s safe to say that Ohio State Buckeyes fans certainly aren’t happy with current head coach Ryan Day after the team brutally lost to the Michigan Wolverines for the second time in a row. Many fans have even gone as far as to suggest that Day should be fired, and they already have a replacement in mind – current Tennessee Titans head coach Mike Vrabel. And according to one prominent Tennessee Titans beat writer, it’s certainly possible that such a hire happens.

Here’s what Rexrode wrote about the situation for The Athletic:

It’s more than an Ohio State fan fantasy — by the way, OSU loyalists, if at least half of your message board threads right now don’t have “Vrabel” in them, what are you even doing? — and it should not inspire scoffs of dismissal from Tennessee Titans fans. It should inspire reviews of the liquidity of the financial assets of Titans controlling owner Amy Adams Strunk. Keep that checkbook handy.

I don’t know for sure that Vrabel would take the job at his alma mater if offered. I know Ohio State should offer it, and anything Vrabel wants to take it.

And I wouldn’t totally rule out all of these things happening in a matter of weeks as opposed to months.

Rumors and speculation about Vrabel’s potential move to Ohio State have been swirling around social media and messageboards, and Rexrode’s report only fueled that fire.

Ohio State should absolutely fire Ryan Day so he can finally fulfill his destiny as Mike Vrabel’s offensive coordinator. https://t.co/voCn8kK27D

The Michigan fans I know would be petrified about Mike Vrabel coaching Ohio State.

They are decidedly NOT petrified of Ryan Day.

I have Ohio State fans in my mentions who are convinced that Mike Vrabel—one of the five best HCs in the NFL—would take a college job where he's begging 17 year olds to play for him.

Sorry, I can't see that one happening no matter how great that job would be if it opens

Should Ohio State be crazy enough to fire Ryan Day I can think of one Power 5 Program immediately West of the Mississippi that should pay off its HC and hire Day, whatever it takes. That program would finally have an Offense its fans could be proud of.

A guy can dream, can’t he? https://t.co/KBEwBNAB7m

It would certainly be a massive change in both the NFL and the college football landscape. Meanwhile, the Buckeyes are still hoping to make this year’s College Football Playoff.