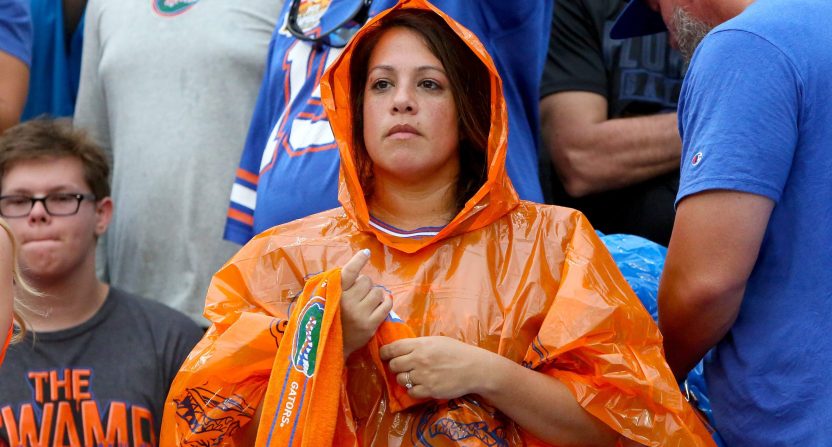 Hurricane Ian is currently bearing down on Florida and the rest of the Southeast United States. While the impact of the immense storm is sure to impact many important aspects of life this week, it’s also impacting sporting events that are scheduled for the coming days. At least two college football games have now been rescheduled to provide more time for the hurricane to pass through.

The American Athletic Conference and the University of Central Florida announced Tuesday that their game against the SMU Mustangs, which was scheduled for Saturday, October 1, has been rescheduled for Sunday, October 2. The new kickoff is set for 1:00 p.m. Eastern on Sunday. As far as how the game will be broadcast, that’s to be determined, though it will be on one of the ESPN networks or streaming services.

“UCF Athletics, in conjunction with the AAC, continues to monitor Hurricane Ian and its potential impact on the Orlando area,” read a statement from the school, implying that if the storm worsens or continues longer than expected, the game could be moved again.

Update: ESPN’s Pete Thamel reported Friday that the SMU-UCF game has now been moved to Wednesday, Oct. 5. Both teams have a bye that week.

Source: UCF’s home game against SMU will be moved to Wednesday Oct. 5 because of Hurricane Ian. Both schools have a bye next weekend. The game will be played Wednesday night. It had been re-scheduled for Sunday.

Meanwhile, Eastern Washington’s game against the Florida Gators in Gainesville, which was originally set for Saturday, October 1, has also been moved to Sunday, October 2. Kickoff for that one is now set for noon Eastern at Ben Hill Griffin Stadium. The game remains available digitally on ESPN+/SEC Network+.

The South Florida Bulls are also rescheduling their game against the East Carolina Pirates. Originally scheduled to kick off at 7 p.m. at Raymond James Stadium in Tampa, the game is moving to Boca Raton at Howard Schnellenberger Field and will now kick off at 2 p.m. Eastern. The game will be televised on ESPN+.

For now, Florida State says that they’ll try to keep their Saturday time against Wake Forest, as Ian’s path appears to avoid Tallahassee by a substantial amount.

FSU AD Michael Alford: "We remain confident we will be able to safely host Saturday’s football game against Wake Forest at its scheduled kickoff time."

We have to imagine that these plans remain in flux as Hurricane Ian’s path continues to evolve and shift, not to mention the unknown impact ahead when it makes landfall.