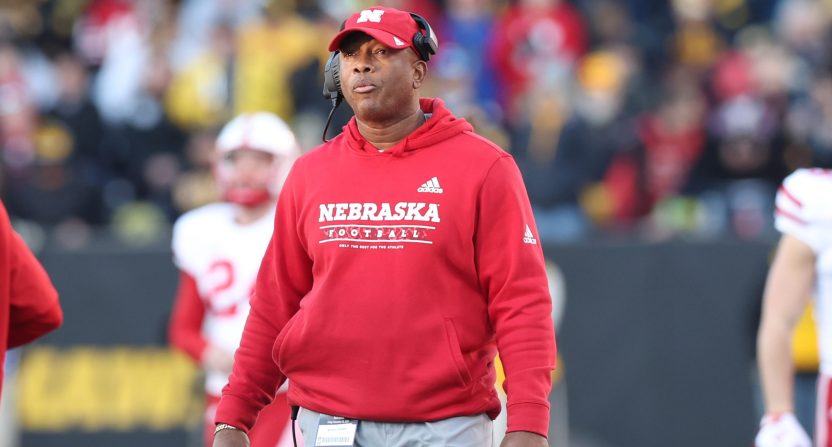 The Nebraska Cornhuskers will move forward with newly hired head coach Matt Rhule in the 2023 college football season after a disappointing 2022 season. However, some disturbing news emerged about former interim head coach Mickey Joseph on Wednesday.

According to Sara Fili of KETV Newswatch in Omaha, Joseph was arrested in Lincoln, Nebraska on Wednesday following a domestic disturbance.

#BREAKING Per Lincoln Police:
Robert ‘Mickey’ Joseph, age 54 of Lincoln, was arrested at a separate location, for Strangulation and 3rd Degree Domestic Assault. He was lodged in the Lancaster County Jail. pic.twitter.com/Z9lZCdLenB

The exact details of this case have not been released. Lincoln police released a statement on the arrest, saying that additional information would not be released to protect this victim in this case.

“To protect the victim in this case and in compliance with Nebraska state law, additional information, including the identity of the victim and any injures, is not being released,” said Lincoln police via Ketv.com.

Regardless, this is obviously a very serious situation, which may directly impact Joseph’s role with Nebraska moving forward.

Jeez, there is always something going on in Nebraska. First the hiring of Matt Rhule, now Mickey Joseph got arrested for domestic violence dispute. Crazy!

Mickey Joseph was arrested and now is facing charges of domestic assault and strangulation.

Tom Osborne said Mickey Joseph would be a good addition to any staff. Then this happened. Details coming on @KETV Wednesday. https://t.co/2PRgm1gYz1

While the team decided to hire Rhule as their new head coach, there was talk that Joseph may be retained as a potential assistant coach.

Nebraska athletic director Trev Alberts released a statement on Joseph’s arrest on Wednesday, revealing that the former interim head coach has been placed on administrative leave from the program.

“I was made aware of the charges against Coach Joseph and given the nature of the allegations and based on University policy, he has been placed on administrative leave,” said Alberts via the New York Post. “We will have no additional comment at this time.”

It was already in question whether or not Joseph was going to remain with Nebraska under Rhule in some capacity next year.

With these disturbing charges against him, it now seems very unlikely that will be the case.