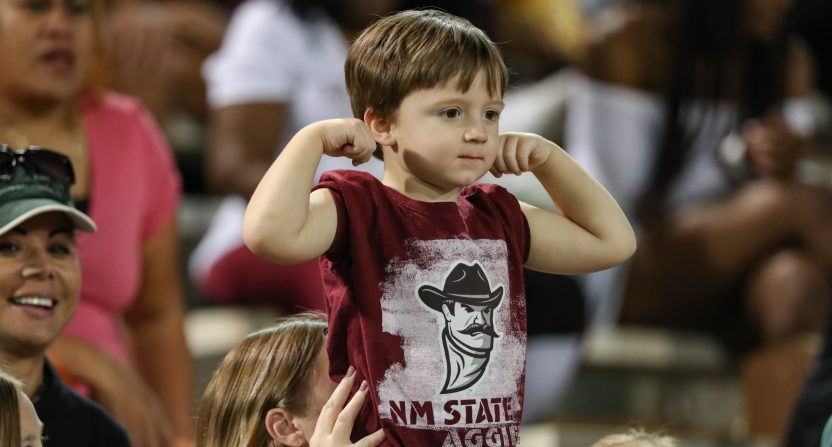 New Mexico State is currently 5-6 and was unable to play a 12th game after an October contest against San Jose State was canceled. After announcing they’re seeking a waiver to become bowl eligible, the school has now scheduled a 12th game this weekend against FCS foe Valparaiso.

The Aggies announced the surprise schedule change on Tuesday.

New Mexico State wasn’t expected to be in this position but they throttled Liberty in Hugh Freeze’s final game as the coach there, putting them within one win of bowl eligibility. Their Oct. 22 home game against San Jose State had been originally postponed and eventually canceled after the death of San Jose State player Camdan McWright. The Aggies had attempted to schedule a game against an FBS opponent during its open week on Nov. 3 but were unable to. The school also said it was having trouble finding an opponent this weekend as it asked the NCAA’s football oversight committee for a waiver to play in a bowl game.

While it waits to find out if that waiver is accepted, Valpo stepped up and decided to give it a go, undoubtedly for a solid payday.

If New Mexico State wins and goes 6-6, they’ll still need a waiver to be bowl eligible as they already have an FCS victory under their belt.

New Mexico State football has added a game against Valpo for this Saturday.

Not about bowl eligibility. NMSU wanted a final game for senior day purposes and filling a home game. Still waiting on a waiver to get a bowl at 5-6. (Already have an FCS win).

NM State and Valparaiso will kick off at 1:00 p.m. MT at Aggie Memorial Stadium and the school will treat it as their Senior Day as well.