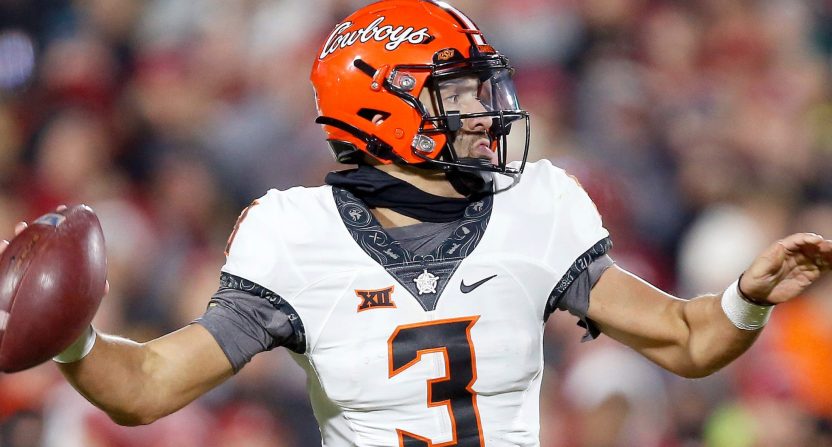 Oklahoma State has lost a key contributor to the transfer portal.

Starting quarterback Spencer Sanders hit the portal on Monday. Sanders, a four-year starter with the Cowboys, announced the news on his Twitter account.

Sanders wrote, “It is with a very heavy heart that I am announcing my decision to enter the transfer portal today, and in the spirit of the ‘Cowboy Culture,’ I wanted everyone to hear it directly from me.”

Sanders had a celebrated career at Oklahoma State. He finished fifth on OSU’s all-time passing yards leaderboard with 6,911. The only players ranked ahead of him are Mason Rudolph, Brandon Weeden, Mike Gundy, and Zac Robinson.

He is also one of six quarterbacks in Oklahoma State history to throw for at least 50 touchdowns. Sanders finished with 50, five off Josh Fields, who ranks fifth all-time.

In 10 games played in 2022, Sanders threw for 2,642 yards, 17 touchdowns, and nine interceptions. He completed a career-low 57.6 percent of his passes but stayed sturdy in most other statistics.

There should be a slew of suitors for Sanders in the portal. It’s becoming very quarterback-heavy but most QBs have already found homes. Sanders joins D.J. Uiagalelei, Hudson Card and as of Monday, Kedon Slovis as notable players who won’t play for the team they did in 2022.

Spencer Sanders should be remembered as one of the best players to wear an OSU uniform, and one of the toughest dudes anywhere. He was a 4 yr starter, an All-Big 12 QB, and the Fiesta Bowl MVP. He should be celebrated as much as any player to wear orange & black.

Spencer Sanders gonna end up at a big name school for sure. One, that has plenty of money and an immediate need for a quarterback. And, there are a decent amount of teams that check that box right now.

Spencer Sanders is now in the transfer portal.

LOL, I will be unable to keep up with all of this. 🤣 So much movement. https://t.co/ofvDCEqvcH

If #BYU wanted to make a splash in year one of the Big 12, go get former Oklahoma State QB Spencer Sanders. Was a four-year starter with the Pokes. https://t.co/pc8vRSgnIw

Very curious to see what kind of damage Spencer Sanders could do outside of Stillwater.