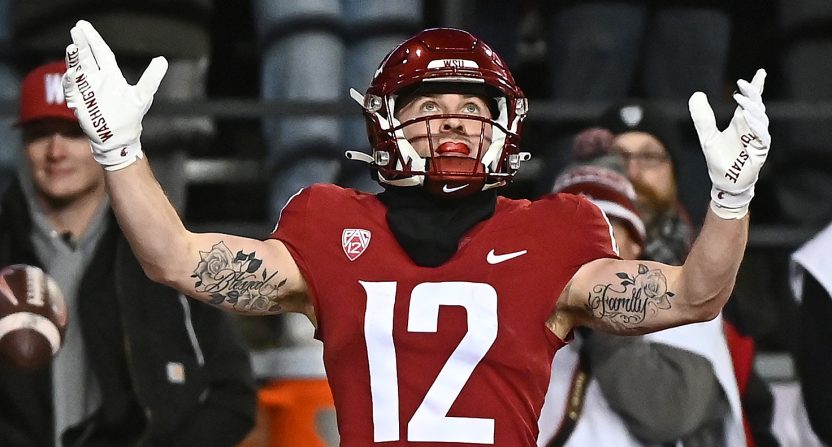 The Washington State Cougars hosted the Washington Huskies on Saturday night in the Apple Cup, the annual football game between the two Evergreen State rivals. Officially, the Huskies defeated the Cougars 51-33. When we look a little deeper, though, at least two other Pac-12 programs had skin in the game.

Washington and Washington State were playing for victory in their rivalry game and the pride that comes with it. They were also playing for a spot in the Pac-12 Championship Game — in a manner of speaking, anyway.

Neither the Huskies or Cougars had any chance to play in the game themselves. Oregon needed Washington State to win. That would have left the Ducks in a two-way tie with Utah for second place in the conference. Since Oregon beat the Utes, the tiebreaker would have belonged to them. With Washington win, second place was a three-way tie between Washington, Oregon and Utah. That’s where things get complicated.

In a three-way tie, the first tiebreaker scenario is head-to-head record, but only if every team involved played every other team involved. The Utes and Huskies did not play. That opened the door for tiebreaker No. 2, head-to-head record against conference opponents that all three teams played. So, when Washington’s Wayne Taulapapa scored from 40 yards out to give the Huskies an insurmountable lead, you might have heard cheers from Salt Lake City or groans from Eugene.

Bad news for Oregon. Washington defeats Washington State in the Apple Cup. Utah will take on USC in the Pac-12 Championship Game pic.twitter.com/DNcUDa0Gxl

The Pac-12 has had a strange history, particularly in the College Football Playoff era. So, even before the Apple Cup really got going, fans of the conference were more than prepared to handle the weirdness.

Watching the Apple Cup madness is even funnier when you remember that the winner of this game decides whether Oregon or Utah — two completely unrelated teams — play for a conference championship.

That did not change. Both during the game and when it was over, college football fans embraced the complete madness of it all.

Congratulations to Utah for winning the Apple Cup

And for the odd scenario to unfold on Saturday night as it did, two other things needed to happen earlier in the day. One, Utah needed to beat Colorado. That game met expectations, with the Utes stomping the Buffaloes, 63-21. Two, Oregon State needed to beat Oregon. A Ducks win would have given them a better record than Utah. That, though, did not happen.

Utah won the Rumble in the Rockies, the Civil War and the Apple Cup today. Quite the day.

Another winner of the day was USC. The Trojans wrapped up their Pac-12 schedule one week earlier with a win over UCLA. They finished the regular season on Saturday night against Notre Dame. USC defeated the Fighting Irish, which figures to help its College Football Playoff argument. Also, the Pac-12 Championship Game against Utah will also give the Trojans a chance to avenge their one loss on the season. If that happens, it will be awfully hard to keep the Trojans out of the CFP.

While politics make strange bedfellows, sports can do. That was never more evident than it was during Pac-12 After Dark on Saturday night.