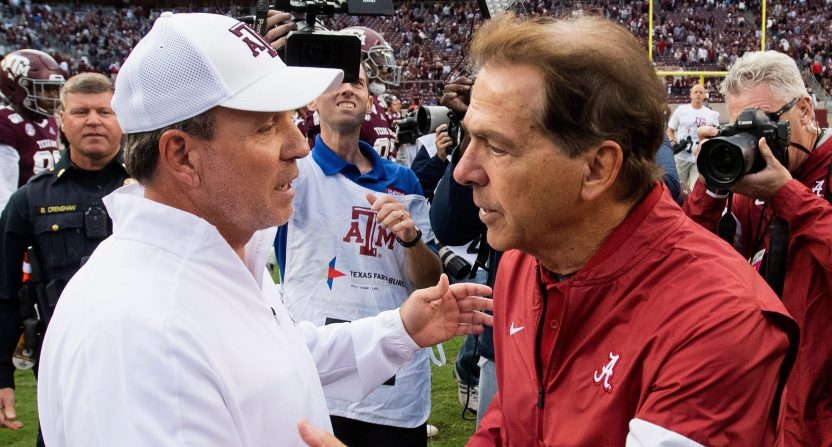 A few months ago, everyone in the country was looking forward to the game between Texas A&M and Alabama because of the controversy that occurred between Aggies’ head coach Jimbo Fisher and Crimson Tide head coach Nick Saban (seen above together after a 2019 game).

Saban accused Fisher and the Aggies of cheating, which started a firestorm of controversy between the two head coaches. But going into this weekend’s game, ESPN’s Paul Finebaum thinks that the Crimson Tide should have no problem with the Aggies Saturday. Here’s what he said on ESPN with Matt Barrie Sunday:

“Well, it’s pretty high as you go two weeks ahead to Tennessee, but let’s be honest, next week against Texas A&M, that’s a cupcake, the way things have been going with the Aggies lately,” Finebaum said. “It’s just amazing to think about. That was the game of the year in college football before the season, and now, it’s just literally an afterthought.”

Despite that, however, Finebaum is concerned about the Tide missing Bryce Young down the road.

“I think you have to be concerned. Backup Jalen Milroe looked very very good, but Bryce Young is the best quarterback in the country. He does so many things. The disappointing thing for Nick Saban and Bill O’Brien – the offensive coordinator – Alabama’s offense was just starting to percolate. Now, they have to shift things for the next couple of weeks. It will be like watching the medical wire in the NFL to see what the deal is with Bryce. His doctors will get a lot of attention this week.”

Saban said he didn’t think that Young’s injury was serious, which is good news for Alabama. The only question is, will Young miss some time? And if he does, does that make the Aggies less of a “cupcake”?