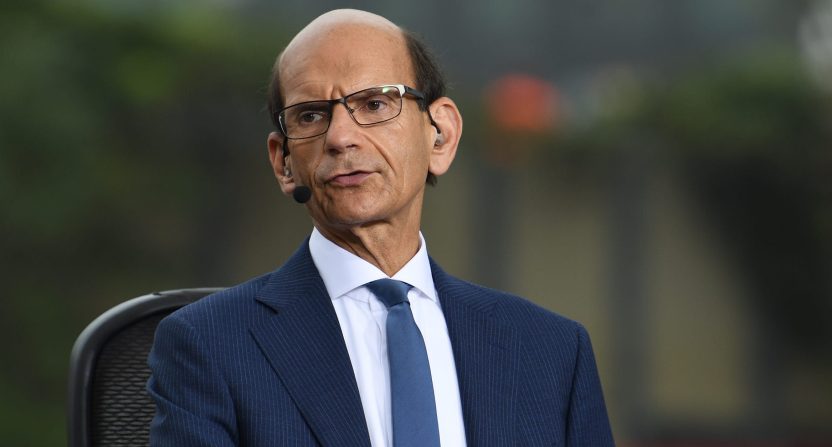 Most Americans would dream of their employer handing them $90 million to go do literally anything else than work at their current place of employment.

That might be the scenario soon facing Texas A&M head coach Jimbo Fisher after his Aggies were humiliated 42-24 by Mississippi State on Saturday. That marked their second loss of the season. The Aggies were also upset by the notoriously scrappy Appalachian State Mountaineers at home earlier this year.

If Fisher thinks his $90 million buyout gives him additional job security, he might be wrong with that math. ESPN reporter and SEC whisperer Paul Finebaum appeared on the network’s college football recap Sunday and dispelled that myth following the fallout from the game.

“They’ve got a lot of issues. The buyout is about $90 million,” Finebaum said. “I spoke at a dinner a week ago in Dallas the night before the Arkansas game, and these are the top A&M people including the president … these guys don’t fool around. You know Texas. A $90 million buyout? That doesn’t faze these guys.

“They’re embarrassed right now. They’ve lost to Mississippi State for the second year in a row. There’s no telling what the score’s gonna be like Saturday night in Tuscaloosa.”

Finebaum went on to label the Aggies as “a cupcake” on Alabama’s schedule.

As of this writing, Fisher will be the Aggies’ head coach on Saturday when they face the Alabama Crimson Tide in Tuscaloosa. That game could go a long way in deciding Fisher’s future with Texas A&M.

[ESPN College Football on YouTube; photo of Finebaum ahead of the Jan. 13, 2020 national championship game from The Greenville News, via USA Today Sports]