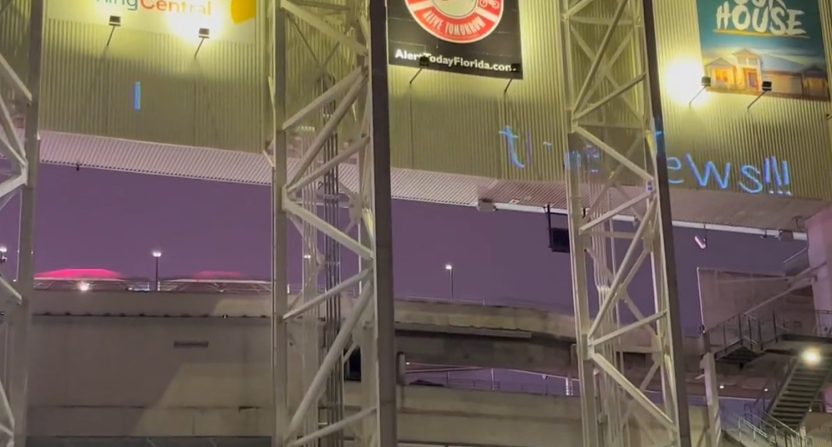 The Georgia Bulldogs‘ 46-20 win over the Florida Gators Saturday in their annual neutral-site game in Jacksonville saw some controversy afterwards. Following the game, someone projected an antisemitic message onto the exterior of TIAA Bank Stadium, with that message endorsing Ye (formerly Kanye West)’s recent comments about Jews.

Horrible to see that someone projected an anti-Semitic message on to TIAA Bank Field at the end of the sold-out Georgia-Florida game. A relative sent this to me. It’s in reference to comments Ye (formerly Kanye West) made recently.

This hate has to stop. Period. pic.twitter.com/kBKYUx7hIh

That message, “Kanye is right about the jews!!!”, was also projected on other Jacksonville buildings:

And there were other antisemitic messages on banners around the city:

At Chaffee and I-10 in Jacksonville. #AntiSemitism on another American overpass. This is horrifying. pic.twitter.com/3ICenqPR4P

On Sunday, the SEC, Georgia, and Florida all issued statements condemning the antisemitic messages around Jacksonville. Here’s the SEC statement:

Here’s the joint statement sent out by Georgia and Florida:

A joint statement from the University of Georgia and @UF. pic.twitter.com/V17SSaDr6K

“We strongly condemn the anti-Semitic hate speech projected outside TIAA Bank Field in Jacksonville after the Florida-Georgia football game Saturday night and the other anti-Semitic messages that have appeared in Jacksonville. The University of Florida and the University of Georgia together denounce these and all acts of anti-Semitism and other forms of hatred and intolerance. We are proud to be home to strong and thriving Jewish communities at UGA and UF, and we stand together against hate.”

Jacksonville is a city made better because of its diversity. Those who spread messages of hate, racism and antisemitism will not be able to change the heart of this city or her people. I condemn these cowards and their cowardly messages.

Hate has no place in our city. Jacksonville stands with our Jewish neighbors and against disgusting antisemitic rhetoric.

The annual Florida-Georgia game, often called The World’s Largest Outdoor Cocktail Party, has been played in Jacksonville since 1933 with only two exceptions, but that may change in the future. The game is currently under a contract to be played in Jacksonville through 2023, with an option to extend it through 2025, but there’s a lot of uncertainty about what may happen after that, from it going back to campuses to a rotation also involving Atlanta.

The antisemitic messages here follow a disturbing recent trend of those in sports and society. West’s comments led to a hate group in Los Angeles holding “Honk if you know Kanye is right about the Jews” banners and performing Nazi salutes, while Brooklyn Nets‘ star Kyrie Irving promoted an antisemitic film and refused to take that tweet down even after criticism from team owner Joe Tsai and a NBA statement against hate speech and antisemitism (which included no specific mention of Irving). Irving has since defended his promotion of that film and blasted reporters for asking about it.