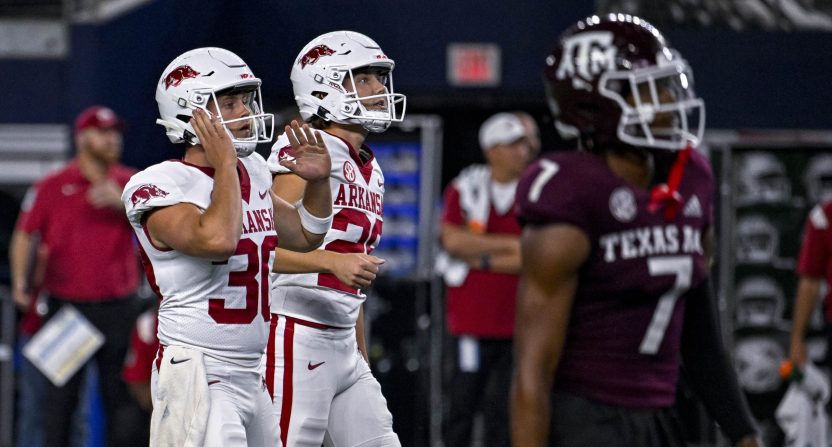 The No. 23 Texas A&M Aggies took down the No. 10 Arkansas Razorbacks 23-21 in SEC college football action on Saturday at AT&T Stadium. Texas A&M erased a 14-0 deficit to come away with the victory and even scored 23 unanswered points to take a 23-14 lead in the third quarter.

The game also featured some wacky plays, with two plays particularly standing out- and they were both huge for Texas A&M.

Arkansas had first-and-goal in the second quarter when quarterback KJ Jefferson while trying to leap (for some reason) from the three-yard line. That went nowhere, but the ball went right into the hands of Texas A&M defensive back Tyreek Chappell. And when Chappell was about to get tackled, he handed the ball off to Aggies defensive back Demani Richardson, who then took the ball to the house for a 97-yard (combined) touchdown.

This may be the wildest scoop n’ score we’ll see in college football this season.

So, that was a game-changing play, and then what was essentially a game-ending play came on an Arkansas field goal try with 1:35 remaining. The Razorbacks had the chance to take the lead, but a 42-yard field goal attempt from Cam Little hit the top of the right upright and fell to the ground in the end zone. No good.

This is a mind-blowing doink. 🏈 pic.twitter.com/oMuUq9zR5n

That would be a great kick in a trick-shot competition, at least.

Devon Achane starred on offense for Texas A&M, running for 159 yards over 19 carries (8.4 AVG) and a touchdown.

Each team is now 3-1. After Texas A&M was upset at home by Appalachian State in Week 2, Jimbo Fisher’s squad has now taken down ranked teams in consecutive weeks (they beat then-No. 13 Miami last week).

The college football world has had plenty to say about the game, and especially the doink:

That should be 25 points, just like in Rock N Jock Basketball. https://t.co/up0SVQB1SB

Hitting the top of the goalpost like this should be like catching the Golden Snitch in quidditch and be worth 150 points. https://t.co/YQL7zhUQbu

Because this sport is amazing, this was indeed not the first time we'd seen a top-of-the-post doink this season.https://t.co/tmkBOlSQ3y

Since joining the SEC, Texas A&M has beaten Alabama more times than they've lost to Arkansas.