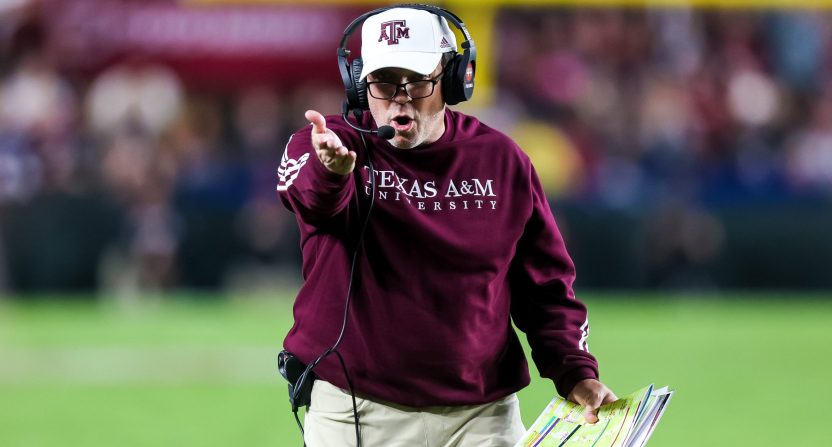 In college football, you can stack the odds in your favor with money. You can buy better coaches, better facilities, and — with name, image, and likeness (NIL) — better players. Few schools burn more cash in pursuit of sports glory than Texas A&M.

The Aggies spend a lot and they make a lot.

According to Sportico.com, their athletic department was sixth in the nation in total operating expenses ($142 million) for the 2020-21 academic year. They also have one of the richest athletic departments, with a college football program that according to 247sports.com, is worth $147 million.

Argue with those figures all you want. The larger point is that Texas A&M has the financial resources to succeed at the highest level. So, when it falls short, people are going to talk.

How embarrassing is it to be a Texas A&M fan right now? They must be crying in the fetal position while clutching their Johnny Manziel bobblehead dolls. This is not what they expected when the school gave Jimbo Fisher a 10-year, $75 million contract to woo him away from Florida State, where he won a national championship. It’s one thing to be bad. It’s quite another to be bad in the SEC.

Texas A&M (3-4, 1-3) is the sport’s biggest and costliest failure this season. All that spent money could result in the Aggies finishing with a losing record for the first time since the days of Mike Sherman (6-7 in 2009. #Yikes.). It wasn’t supposed to be this way, not for a program that appeared to have a shot at being a College Football Playoff contender.

When the preseason Associated Press Top 25 poll came out in August, Texas A&M was No.6. It was expected that this team with the nation’s top incoming recruiting class and key players back from a squad that finished 8-4, including a victory over Alabama, would give College Station something to cheer for. Instead, the Aggies are the subject of mockery.

The slow descent into hell started with a shocking 17-14 home loss to Appalachian State. The Aggies could have still salvaged their season, but that probably ended with last weekend’s 30-24 defeat at South Carolina. It was the program’s third straight loss. The streak could continue with Saturday’s home game against No. 15 Ole Miss (7-1, 3-1).

The national pundits have weighed in. ESPN’s Paul Finebaum has called Fisher “a bad hire.” On the ESPN College GameDay podcast, Pete Thamel immediately shot down any speculation that Fisher was in jeopardy (not with a whopping $86 million buyout). However, he argued that finances may have gotten in the way of chemistry. The team has suspended three players for what Fisher says were off-the-field issues.

“Sometimes when finances enter recruiting … decisions aren’t made on fit,” Thamel said. “There have been some interesting fits there at Texas A&M which has resulted in this second wave of young players being suspended. That’s all part of it, right? That’s what college athletics are. You get to college. You’re probably not ready. You show up. I wasn’t ready when I got to college. There’s a big learning curve, educationally, socially, etc. They’re going through it right now in a high-profile way.”

Thamel added, “It’s a mess, and Jimbo is not hardwired well to handle messes. That’s just not who he is. He’s not a soothing, calming presence.”

Many, particularly Alabama fans, might be relishing in Fisher’s misery. In the off-season, he got into a well-publicized kerfuffle with Nick Saban over Saban saying that Texas A&M used NIL to buy commitments from recruits. Saban later apologized for singling out Texas A&M. But their feud does highlight the difference between spending money and spending it wisely.

Texas A&M thought it was buying a ticket to routine national championship contention with Fisher. His winning percentage is 67.27 since his first season in 2018. His predecessor, Kevin Sumlin, had a winning percentage of 66.23 and was fired after six seasons.

The good news for Texas A&M? Money helps you to overcome mistakes. While this season looks like a bust, the Aggies can throw more dollars around in 2023. They can only hope their return on investment is better.