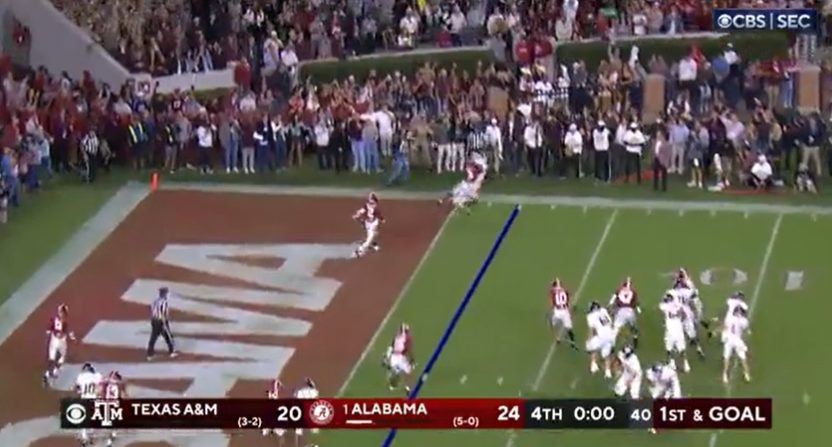 As Texas A&M started the final possession of Saturday’s game against Alabama, there were two possibilities. One, the Aggies could have scored and defeated the Tide for a second straight year. Two, A&M, a program that has not enjoyed a good 2022 season, could have fallen just short against the nation’s top-ranked team. There was really no way that the game would have been a negative for the Aggies. Yet somehow, that’s exactly what happened.

While Texas A&M got a jaw-dropping reception from receiver Evan Stewart and Alabama had a game-clinching interception overturned on a holding penalty, the Aggies still fell short. On the two-yard line with enough time to run one play, Jimbo Fisher and company dialed up a play that, quite frankly, left a lot to be desired.

Everything was going so well for Texas A&M on the final drive… until whatever the heck this play was.

The final play call got a lot of well-earned second-guessing. We even saw an undeniable parallel between the Aggies on Saturday and what the Denver Broncos did on Thursday night. Fisher and Texas A&M got a lot of criticism when this game was over.

That last play by A&M ugh.

WHAT ON EARTH WAS THAT PLAY CALL JIMBO

In hindsight, Jimbo Fisher dialing up Brian Ferentz and letting him make a guest play call on the last play of the Alabama game was probably a poor decision.

Jimbo flipping through all 1,343 pages in his playbook looking for the perfect play.

I really don't understand this being the playcall you land on with the game on the line. Just nonsensical. Even a perfect throw, perfect route… it's a low percentage play. https://t.co/ZxLePEmdaN

Goodness, what a horrific play call from Jimbo Fisher https://t.co/NkzqTUScnB

Jimbo Fisher has the absolute worst plays in the world and when the stage is biggest he calls the worst ones he has. That is so, so admirable.

Nick Saban and the Alabama defense deserve plenty of praise for coming through with a big stop. Still, it feels like Fisher, a coach with $90 million remaining on his contract, should probably have a better play dialed up in such a big spot.