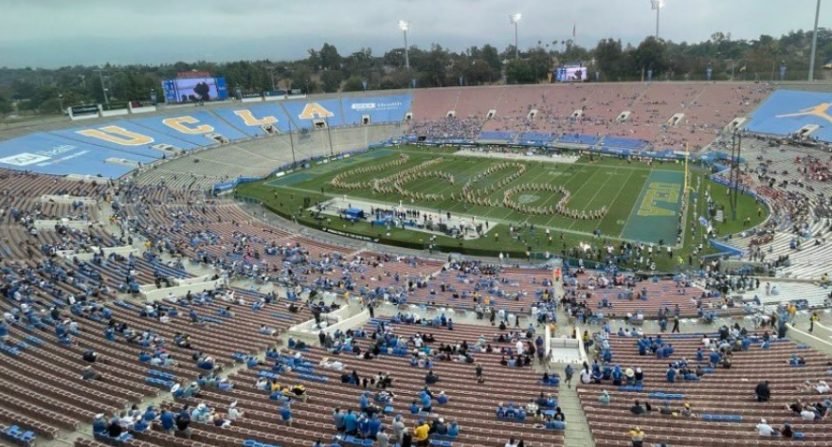 While they were given an upset scare, the UCLA Bruins prevailed 32-31 over South Alabama with a last-second field goal from Nicholas Barr-Mira. Not many people saw the dramatic win in person, though. That irked one of the greatest players in UCLA history, Troy Aikman.

During the game, Sports Illustrated’s Ross Dellenger shared a photo that was taken and posted to Twitter by Jonathan Adams. The photo showed a sparse crowd, with several empty rows of seats with Dellinger’s caption “This is a pic from the Rose Bowl today from @JonathanAdams…Woof.”

Aikman did not like what he saw and made his frustrations known.

This is an embarrassment but we couldn’t fill the Rose Bowl in 1988 when we were the #1 team in the country. Anyone else at UCLA think it’s time for an on-campus 30,000 seat stadium? Of course, if we can’t play better than we did today, it would be half-empty too. pic.twitter.com/jteVU8XV76

This is not the first time this season we’ve seen this with UCLA. The season-opening game against Bowling Green failed to draw even 30,000 fans and was a record low for UCLA at the Rose Bowl. One week later, the Bruins defeated Alabama State and the attendance was better, but not by a significant margin.

With those two games fresh on everyone’s mind, Aikman’s comments

He speaks the truth. I nominate Troy to start getting UCLA more behind its football program. https://t.co/DxQJoJObiI

On campus is cool, but if they’re thinking only 30K, yikes. https://t.co/rfZFNmd55u

From an academic standpoint, UCLA has become such a competitive institution to get into — legit the top 5% of high school students in CA can't even get in!

Do you think these kids care about sports? https://t.co/0pkxsRvebX

The first two games — particularly the opener — were played during a massive heat wave. Given how little protection from the sun the Rose Bowl has to offer, the poor attendance was inevitable. In this case, that doesn’t apply.

That said, there were other reasons to potentially explain the lack of attendance. One, Bowling Green, Alabama State, and South Alabama aren’t exactly known for massive fanbases, particularly for road games. They also don’t attract casual fans. Furthermore, school is not even in session at UCLA yet.

There are very real explanations for the low attendance, such as, you know, school hasn’t started yet. HOWEVER, that doesn’t change the fact that the Rose Bowl has always been a terrible location for UCLA, and nothing ever will. Play at SoFi, or rebuild Drake stadium. https://t.co/9kIPYTPi2d

Westwood and Pasadena are also nearly 30 miles apart and with Los Angeles traffic, that’s potentially a drive that will take the better part of an hour — if not more.

The general lack of success in recent years certainly doesn’t help matters. That said, UCLA is coming off of an 8-4 season. Furthermore, as Aikman pointed out, the attendance wasn’t great during his playing days, even when the Bruins were competing for a national championship.

Aikman is onto something with the idea of a smaller stadium. That said, 30,000 may be on the low side. Many Pac-12 teams play in smaller venues with more intimate settings. That may be a harder sell in the Big Ten, though, which has the NCAA’s three biggest football stadiums by capacity (Michigan, Penn State, and Ohio State).

But part of the problem with these crowds is that playing at the massive Rose Bowl, they look even smaller. A crowd of 30,000 looks more like 3,000. Even if a 30,000-seat stadium won’t work, these sparse crowds make it hard to justify UCLA continuing to play games at the Rose Bowl, with more seats empty than occupied.