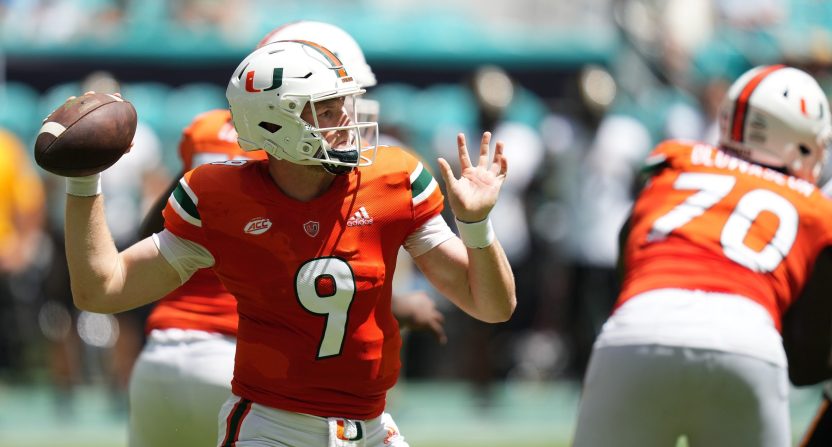 The concept of home-field advantage is one of the oldest and most cherished clichés in college football. What athlete wouldn’t want tens of thousands of local fans cheering on their team and making it hard for the opposing offense to operate while it has the ball?

“I like away games better. … We don’t really have much of a college atmosphere because we play at Hard Rock [Stadium],” Van Dyke told Palmer.  “We’re about twenty-five minutes away from campus, so a lot of students don’t go up most of the game unless it’s a big game.”

“That’s why I like going into away stadiums and seeing that college atmosphere and making the crowd quiet.”

Palmer admitted that he, too, enjoys going on the road and silencing the opponent’s fans.

“When you silence a crowd, when you throw a touchdown pass on third and long — it was just as loud as it gets, instantly it just got quiet and the only people celebrating are the people who actually put in the work with you: the coaching staff, the trainers, equipment managers, people on the sideline and the players,” Palmer said. “Some of my most memorable games I was a part of were just like huge road wins.”

The Hurricanes lost on the road last week to Texas A&M. Unfortunately for Van Dyke, their next game on Saturday is home against the Tennessee-Chattanooga Blue Raiders.