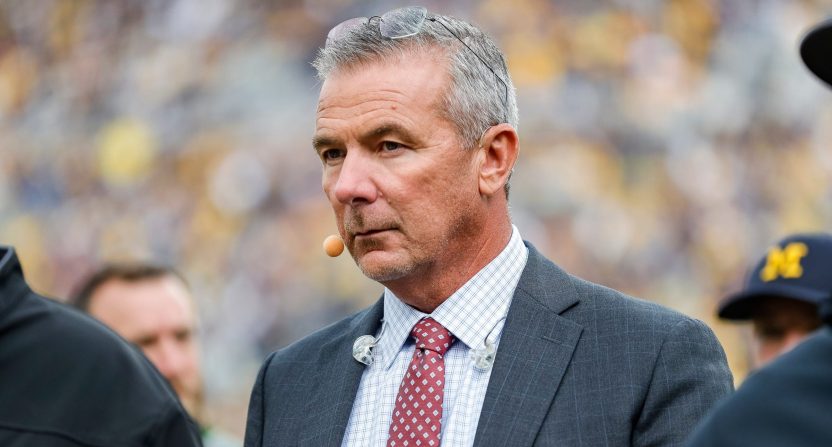 There’s been a budding rivalry between ESPN’s College GameDay and Fox’s Big Noon Kickoff ever since the latter hit the airwaves. That rivalry got kicked up a notch on Saturday during the Michigan – Maryland game when Desmond Howard tweeted about Urban Meyer, who was spotted on the sidelines later.

Before the game started, it was reported that Fox had decreed that the Ann Arbor crowd would not be allowed to bring any Urban-related signage with them. Given the rivalry between Michigan and Ohio State, Meyer’s former school, and the many ways that Wolverines fans could have fun at his expense, it was understandable if not silly.

A lot of folks around the college football world took exception to the news, including GameDay analyst Howard, a Michigan grad, who tweeted “Where do we begin with this one.”

Where do we begin with this one… https://t.co/pYL503jzfu

That’s where he left it as far as we know. Later on, a particular photo made the rounds and showcased Meyer’s reaction to a big Michigan play.

The photo, showing a jubilant Charles Woodson and seemingly dour Meyer, certainly got a lot of people talking around the college football world.

Alternative headline.
Look at the jerk wearing the tie https://t.co/l6lI3Wid8h

I'm not one to talk but Urb's looks like he's been enjoying too many HoHos. https://t.co/PTMMeGJ52B

@CharlesWoodson needs to make this his new background on his phone lol 😂 https://t.co/1ZNPQylrvr