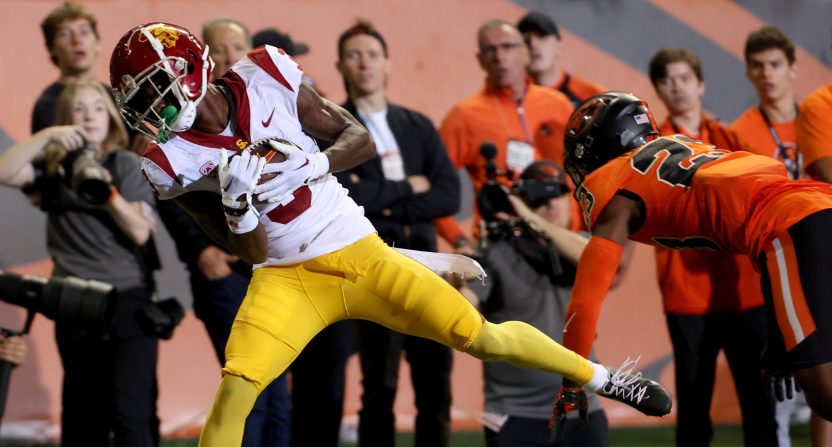 The No. 7 USC Trojans held off the Oregon State Beavers with a 17-14 victory on Saturday in Corvallis. It was a wild finish, and one that many college football fans missed out on, with the game shown on the Pac-12 Network (which still isn’t even on DirecTV, for example), and at a late time- the game concluded at nearly 1 a.m. ET.

Only 10 total points were scored in the game entering the fourth quarter, but the final 4:41 featured two touchdowns.

But USC answered, with Caleb Williams — transferred from Oklahoma to join Lincoln Riley after starring with the Sooners last season — connecting with USC receiver Jordan Addison — had 100 receptions, 1,593 yards, and 17 touchdowns at Pittsburgh last season — for what would serve as the game-winning touchdown.

There wasn’t much room for this throw, but Williams threw a dart to find Addison for the 21-yard score.

Oregon State tried to at least get into field-goal range, but USC’s Max Williams intercepted Oregon State quarterback Chance Nolan (who threw three interceptions on the night) to secure the Trojans’ victory.

Here’s a look at what the college football world has had to say about USC’s victory and the game being shown on the Pac-12 Network:

Horse is very dead but the Pac-12 created a situation where Oregon State is up on USC at halftime, there are about to be very few other games of national interest, and it's on an under-carried network that you probably do not get. Larry Scott was so bad at what he did.

I’m sitting here listening to the Radio Call of Oregon St/USC because I can’t watch it the Pac-12 Network. 😂

So I can't watch it. Nor can most of the country.

The game is occurring in the Pac-12 Network Dead Zone, and my 5-minute free trial is about out with USC in the red zone.

Since it sounds like majority of folks on here don’t have Pac-12 Network to watch 4th quarter of USC at Oregon State should I tweet:

At Oklahoma the embarrassing collapses are on FOX, this USC game isn’t even being televised

Why does it matter? USC was one spot behind them in the AP poll. Even with a close one in Corvallis, USC could move up in the poll this week✌️

Now run out of Corvallis and never look back.

Oklahoma lost and USC pulled it out. Should be a spirited Monday show. @FS1 @FoxSportsRadio