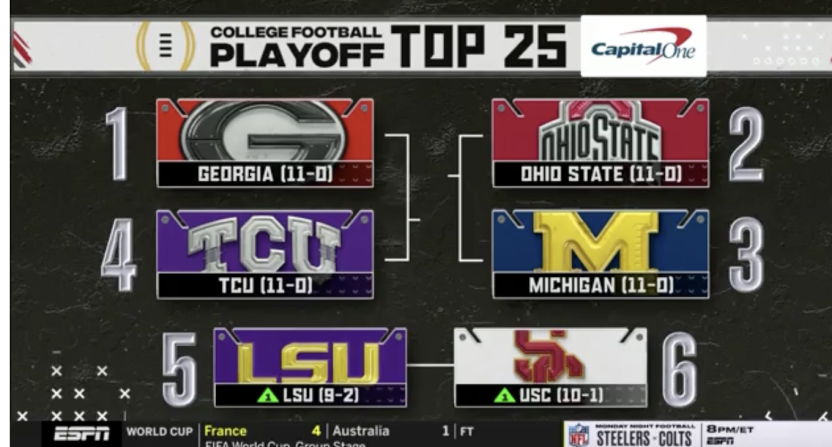 Tennessee was stunned — in beatdown fashion — by unranked South Carolina on Saturday. With the loss, the Vols fell from fifth to 10th in the latest College Football Playoff rankings (and they lost star quarterback Hendon Hooker to a torn ACL). LSU moved up from sixth to fifth, and USC moved up from seventh to sixth.

Alabama (7) and Clemson (8) each moved up a spot as well, while Oregon (9) jumped three spots after taking down Utah (who fell from 10th to 14th) on Saturday.

The biggest jump in the top-25 was Washington moving up four spots to No. 13 after a 54-7 shellacking of Colorado (which followed a a wild 37-34 road victory over Oregon).

Which matchup are you looking forward to? 🤔 pic.twitter.com/HPRCgNRmbd

Saturday could be significant for the College Football Playoff picture, with Michigan taking on Ohio State in Columbus. Perhaps a close, well-played game won’t lead to much movement, but a lopsided game certainly could.

Here’s a peek at how the college football world is reacting on social media to the Week 13 CFP rankings:

The final CFP rankings will be revealed next Tuesday, and selection day will be Sunday, Dec. 4.

Using the CFP's rankings, here's how an expanded playoff would look using the adopted format if selections were today.

No. 6 USC will be in the CFP if it wins out. I don't care what happens to the teams in front of it … including the possibility of No. 5 LSU beating No. 1 Georgia in the SEC Championship Game

I know all we care about is the top 4, but I'm curious how the committee is evaluating Tennessee at this point knowing Hooker is out.

It's a CFP Kenyon Martin situation. (Not sure how many of you are old enough to get that reference.)

1. LSU ranked ahead of USC and Tennessee is ridiculous. The CFP committee is asking us to challenge its credibility with this ludicrous ranking.

Lowest ranked teams at this point of season in @CFBPlayoff rankings to make playoff:

TCU remains in the top 4, but they’ll need to beat Iowa State by at least 53 points or the Committee is expected to drop them.