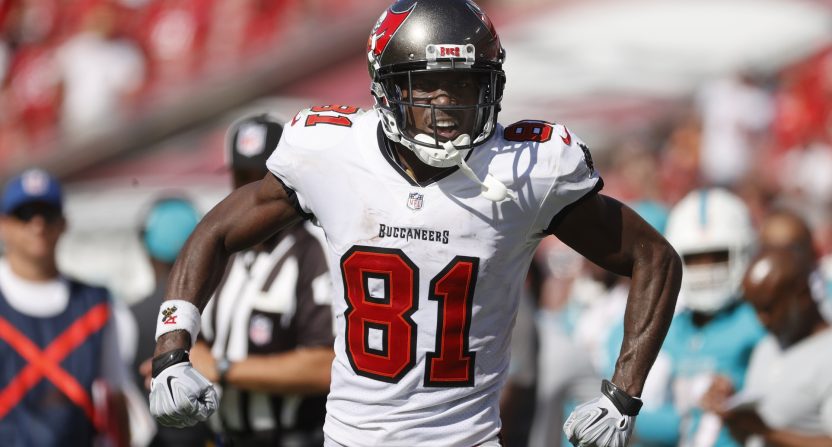 As soon as the Tampa Bay Times released their report that Tampa Bay Buccaneers wide receiver Antonio Brown had reportedly tried to acquire a fake vaccine card before the start of the NFL season, the league was going to bring down the hammer in some form.

The NFL announced Thursday that it had suspended Brown, as well as Buccaneers safety Mike Edwards and free-agent wide receiver John Franklin III, who had been on the Tampa Bay practice squad. Each player was suspended for three games without pay for violating the joint NFL-NFL Players Association COVID-19 protocols.

According to the statement, all three players have foregone their rights to appeal the decision and begin serving their suspensions immediately. That means the soonest Brown and Edwards can return for Tampa Bay would be their Week 16 game against the Panthers on December 26. Brown was expected to be out for the next two weeks as he recovers from an ankle injury.

According to NFL Network insider Ian Rapoport, the Buccaneers were not fined by the league and did assist in the investigation.

The #Bucs were not fined and provided assistance to the league in its investigation. https://t.co/6PN5mKt01I

As soon as the news was announced, there seemed to be a strong sentiment on social media to understand why Brown was suspended for presumably lying about his vaccination status while Aaron Rodgers did not receive a suspension despite misleading people about his status. The difference may be that Rodgers’ status was actually known to the NFL while Brown tried to dupe the league, but that may not sway the public.

Racist suspension when Aaron Rodgers got one play’s worth of fines. https://t.co/r4CYcrYWIT

Interesting. Are there any prominent quarterbacks who also misrepresented their vaccination status this year? No way they'd give a guy like A*ron R*dgers preferential treatment right? https://t.co/OdaByvWUq5

Just to be clear: There is an enormous difference between what Aaron Rodgers did and what Antonio Brown did.

Brown actually used a fake vaccine card and *everyone* thought he was vaccinated.

Rodgers misled the media, but the NFL, the Packers & his teammates all knew his status.

Some people also noted that none of this would have happened had Brown taken care of the private chef who leaked the story to the Tampa Bay Times when he wasn’t paid for his services.

The moral of the story folks is this… Be sure to pay people for services rendered. 😂 https://t.co/k0MR7OPpIJ

And other still noted that Brown cost himself three NFL game checks over the suspension, which doesn’t seem to justify the effort to avoid getting vaccinated, which is free.

Money Antonio Brown owed the chef who snitched on his vaccine status — $10,000

That math is mathin’

For what it’s worth, Brown’s agent released a statement saying that Brown is currently vaccinated but also accepts his punishment from the league. So read into that, and what’s left unsaid, however you like.

A statement from lawyer @seanburstyn, who represents Antonio Brown: pic.twitter.com/QruBfEZNBG