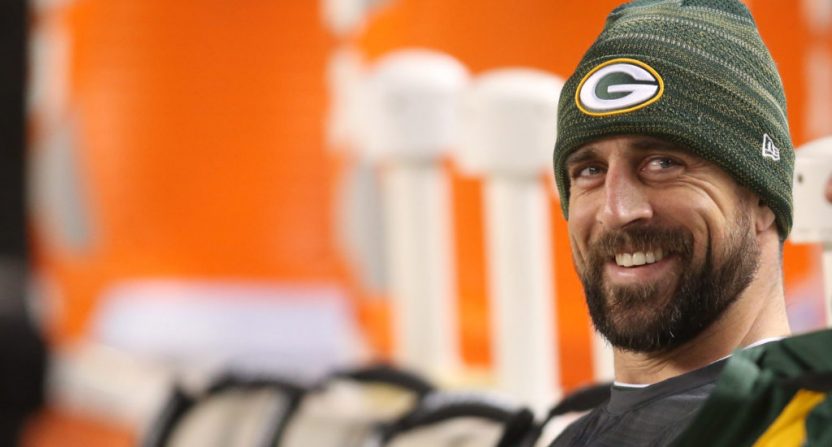 The news that Aaron Rodgers has not been vaccinated this whole time has sent shockwaves through the NFL on Wednesday. The MVP is going to miss at least one game for the Green Bay Packers and has raised all sorts of questions about whether or not he’s violated NFL Covid protocols and put other people in harm’s way.

It seems like every week there’s a piece of news that reframes the way we look at Aaron Rodgers. From the offseason drama that preceded the season to the way critics and former teammates bashed him to the way he forcefully pushed back against that and reclaimed his spot atop the quarterback heap to his inability to handle a tiny bit of criticism, it’s been a roller coaster journey all year long. And with the news that Rodgers was not, in fact, “immunized” against Covid-19 this whole time, it adds another layer to the question of what kind of person Aaron is.

The Ringer head honcho Bill Simmons stopped by The Herd to discuss Rodgers with Colin Cowherd and didn’t mince words about how he thinks this whole thing is emblematic of Rodgers being a “classic narcissist.”

The Aaron Rodgers news is on brand, according to @BillSimmons:

"To me, he seemed like a classic narcissist the last year. Everything was somebody else's fault. He took no responsibility." pic.twitter.com/zK9uCV932L

“I think Rodgers is a diva. I think he’s been a diva the last couple of years. I think the way he handled this offseason was very divaish. He didn’t seem like a team-first guy to me. I didn’t understand it. I didn’t understand why he chose the week of the NFL Draft to blow it up into an even bigger story.

“You talked about ex-teammates…some of the people who have played with him and how they’ve talked about him, how candid he’s been about them drafting another quarterback when he’s in his late 30s. How he makes it seem like he’s on the 2021 Jaguars, but he’s on a good team!

“This ‘woe is me’ stuff, I’m going to go even deeper, I think sometimes people get weird when they get older…Sometimes people who are single start to become a little narcissistic and they start seeing everything through this lens of ‘me, me, me, me.’ What about me? Everything’s about me. To me, he just seemed like a classic narcissist the last year where everything was somebody else’s fault. He took no responsibility. He honestly thought he was going to be the Jeopardy! host which was insane. They were never making him the Jeopardy! host. Everything he did kinda compromised his team.

Some of the stuff Rodgers has done over the last year just seems narcissistic, so when you throw in everything today it’s like ‘yeah, that’s on-brand from what we’ve seen.’”

Rodgers’ reputation has been in a pinball machine all year long and right now it’s looking like the ball is seriously draining and no amount of tilting or bumping is going to save it.