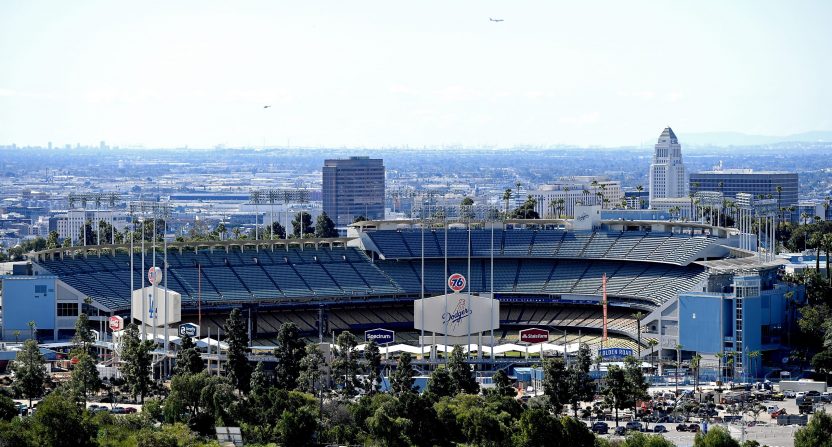 NY Gov. Cuomo says he has encouraged major sports teams in the state to plan on playing without fans; says the state will assist in planning. pic.twitter.com/uErySbbtUH

“I also have been encouraging major sports teams to plan reopenings without fans. But, the games could be televised. New York state will help those major sports franchises to do just that. Hockey, basketball, baseball, football — whoever can reopen — we’re a ready, willing, and able partner.

Personal disclosure- I want to watch the Buffalo Bills. But, I’m still objective; I’m acting as governor. There’s no personal agenda here. Yes, I do want to watch the Bills, but that is not subverting my role as governor. I think this is in the best interest of all the people, and in the best interest of the state of New York.”

Just a few hours later, California Governor Gavin Newsom said that pro sports could return to the state without fans “by the first week or so of June.”

“We expect — if we hold the rate of transmissions, we hold the positivity rate down, we continue to do justice to the hospitilaztion and ICU numbers — that we’ll be making announcements statewide — not just with the regional variances — that will allow for retail, not just to be picked up, but in-store retail to be loosened up.

In addition to that, sporting events, pro sports, in that first week or so of June without spectators, and modifications and very prescriptive conditions, also can begin to move forward.

And a number sectors of our economy will open up, again, if we hold these trendlines in the next number of weeks.”

Newsom — a big sports fan and former pitcher for the Santa Clara baseball team — had previously been very pessimistic on the idea of pro sports returning soon in California. On April 14, Newsom said sports were “unlikely” in California this summer.

Earlier this month (https://t.co/47iqBwezKX), Gov. Newsom was asked about NFL games starting on time with fans in attendance, and said, ‘I’m not anticipating that happening in this state.”

So, Newsom’s comments on Monday are rather surprising, and have to please pro sports commissioners and owners of California teams.

Pro sports leagues have been discussing playing in just one to two locations for a variety of reasons.

The NBA, for example, has been looking at playing all of their games in just Las Vegas and/or Orlando, with commissioner Adam Silver recently telling players that it would be safer and allow the league to speed up the playoffs (with the hope of having seven-game series each round).

There have also been reports of MLB looking to just play in Arizona and/or Florida, but star players such as the Angels’ Mike Trout and the Dodgers’ Clayton Kershaw have been vocal about being very much against any plan that doesn’t allow them to be around families. Being able to play at their home ballparks in California — and sleep in their own homes — is something that would surely be far more appealing to Trout and Kershaw. And MLB’s latest reported plan/hope involves playing in as many home ballparks as possible, so California and New York (who has the Mets and Yankees) allowing home games would go a long way to making that feasible leaguewide.

Pro sports leagues stil have a lot to figure out with beginning/resuming their leagues, but New York and California allowing games at their home stadiums would definitely increase the options.