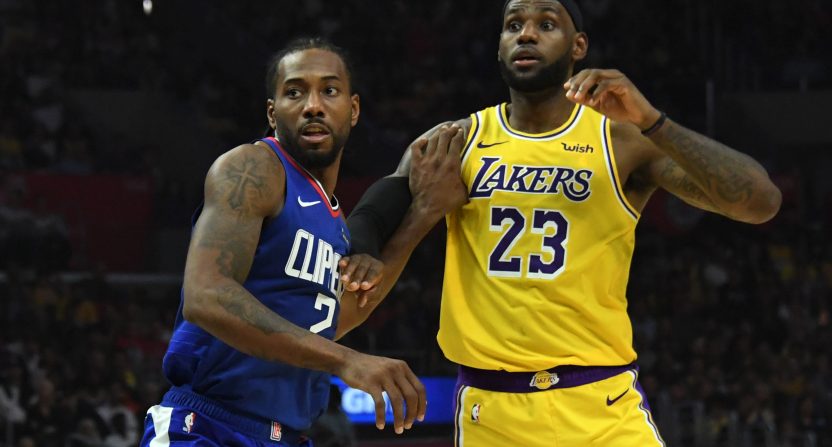 The Decemberists once wrote a bittersweet song called “Los Angeles, I’m Yours,” with the lyrics: “And as it tells its sorry tale in harrowing detail, its hollowness will haunt you.” That must be how it feels to be a sports fan right now in America’s second-largest city.

Due to the COVID-19 pandemic, California Governor Gavin Newsom said on Tuesday that in-state sporting events are “unlikely” this summer (Earlier in the month, Newsom said that he doesn’t anticipate NFL games starting on time with fans in attendance in California).

If sports don’t restart this year, Los Angeles stands to lose the most. You could argue that at least two potential championships will be forever gone. In the NBA, the Lakers and the Clippers are viable contenders. In MLB, the Dodgers are in prime position to pick up a title.

This doesn’t even include other potential missed opportunities. The Rams and Chargers, both struggling to build fanbases, are supposed to move into a new home: SoFi Stadium. And the Angels made one of the biggest free-agent splashes by adding third baseman Anthony Rendon, previously of the reigning World Series champion Washington Nationals.

No one is going to shed a tear for L.A.’s sports woes. Among the big markets, it’s one of the most desirable for athletes for obvious reasons (weather, lifestyle, etc.). It will always enjoy advantages that other cities simply cannot compete with. However, it’s staggering how much this hiatus will affect their pro sports teams.

Without a doubt, the biggest loser would be the Lakers. They already had a tight championship window to cash in with LeBron James and Anthony Davis. James is 35. Davis is a free agent after this season. The former is the biggest problem. James was making a second-half run at the MVP, and lifted the Lakers (49-14) to the best record in the Western Conference and only two games in the loss column behind the Milwaukee Bucks (53-12) for the NBA’ best record.

At the time sports stopped, the Lakers were the odds-on favorite to win the title. They were all-in on this year after missing the playoffs for five straight seasons. They’ve gone a decade without a championship –a considerable drought for one of the league’s flagship franchises. With James aging and no guarantee Davis will be back, this is their best chance at a title.

The Clippers (44-20) are in better position going forward. Kawhi Leonard, 28, is in his prime. He has already proven he can win a championship almost virtually by himself. The Clippers’ management hopes he can do for them what he did for the Toronto Raptors last year. This was supposed to be the year that Clippers took over L.A. from Lakers according to every NBA betting site. But instead, all they can do – all any of us can do – is wait.

As bad as the Lakers and Clippers must feel, imagine you’re the Dodgers. L.A. just acquired arguably the second-best player in baseball when it traded for Mookie Betts in a three-team deal with the Minnesota Twins. The Dodgers sent prospects to the Boston Red Sox for what could be a one-year rental. They are desperate to win their first title since 1988.

L.A. reached the World Series in 2017 and 2018. Last year, the Dodgers finished with the second-best record in the majors (106-56) and the second-best run differential (plus-273). But they were upset in the divisional series by Washington. Betts is supposed to be the missing piece that will finally put the Dodgers over the top.

Coming into this season, L.A. and the New York Yankees are heavy favorites to win it all. However, we don’t know if there will be a baseball season. And if there is, we don’t know what it will look like. If that’s the case, then the Dodgers would have traded prospects for nothing in return. Due to agreement reached between major league baseball and the players union, any player that is set to hit free agency this winter will still be a free agent. That means Betts will likely hit the open market – and he might not actually ever play for the Dodgers.

Admittedly, that’s a worst-case scenario, but it’s also a very real possibility. At least the Angels have Rendon signed. All they stand to lose is a year of production and money. They were not considered to be contenders this season.

As for football, the Rams and Chargers have a problem. Despite the NFL being America’s most popular sport, they have a hard time drawing fans. This past season, the embarrassment reached its peak over an October weekend when more San Francisco fans showed up to cheer for the visiting 49ers, and more Pittsburgh fans turned out to root on the visiting Steelers.

Both franchises are banking on a $5 billion stadium. It should help enhance the game-day experience and create a new generation of fans. But if there’s no football this fall, it will be another lost chance at trying to break through in a market that went decades without the NFL.

Of course, this is all trivial. But the culminative effect of no sports is a constant reminder of how scary and uncertain the world is today. When the games return, many of us will embrace the sense of normalcy.

Until then, as The Decemberists sang it: “This is the realest thing. As ancient choirs sing. A rushing rabble revels from above. Los Angeles, my love.”