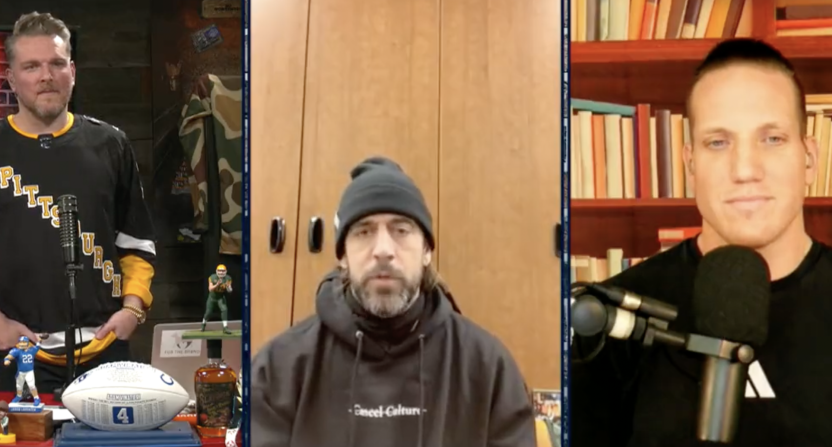 For a guy who believes in cancel culture, Aaron Rodgers sure seems to be in the news a lot.

The reigning NFL MVP, who appears to be on the path to winning the title once more, returned to The Pat McAfee Show on Tuesday to discuss a wide variety of things. Given that he was wearing a shirt with the word “cancel cancel culture” on it (maybe not the worst shirt he’s worn?), we should have figured we were in for something “fun.” We know how much Rodgers loves “woke” things.

And that’s what happened when McAfee brought up the current situation in the NFL where players are entering COVID-19 protocols at alarming rates and games were moved this week to accommodate for that. Rodgers took it as an opportunity to gloat about how the safety measures put in place to help protect people from something that has killed over 800,000 Americans may have not accounted for the Omicron variant.

"The one frustration I have is that throughout all of this there hasn't been any conversation about health. I don't understand why society & the NFL hasn't talked about legitimate Covid treatment options" ~@AaronRodgers12#PatMcAfeeShowLIVE pic.twitter.com/QtLaERUtn4

When McAfee brought up Rodgers’ previous comments that he’d sought medical advice from Joe Rogan, Rodgers cut him off to defend the notion that not only was that the right plan, “society” should be talking about alternative options more.

“The one frustration that I have in all of this is that throughout this entire time there hasn’t been real conversation around health,” Rodgers said. “Like how to be healthier as far as your diet and vitamins and exercise, but the other thing that hasn’t been talked about is treatments.”

“I talked to a lot of friends who had COVID including Joe (Rogan) and figured out a protocol that I had ready in case I got COVID. That basically took my symptoms from what they were to non-existence in 36 hours.”

“I don’t understand why society and the NFL hasn’t talked about legitimate treatment options and monoclonal antibodies are one of them,” Rodgers added, also citing ivermectin, which the FDA has said is not proven to treat COVID-19.

“If you don’t want to do any of that, at least can there be conversations about treatments that can help our guys, if they have major symptoms, to recover quicker.”

Rodgers’ straw man argument that “there hasn’t been real conversation” is absurd. What he’s actually saying is that the medical and science community at large disagree with the notion that you can combat COVID-19 with “diet and vitamins and exercise” and he doesn’t like that. Of course, there has been plenty of discourse around how the virus tends to have less effect on people in good physical health as much as those with risk factors (though younger adults remain open to risk, too). It’s a pretty common talking point, especially now as Omicron variant cases spread.

“Society” has also had plenty of conversations around alternative methods of treating COVID-19, including vaccines and therapeutic options. The problem isn’t that we haven’t discussed the options Rodgers is referring to, it’s just that he doesn’t like the answers that the scientific community has come up with. Monoclonal antibodies, for instance, have been found to be insufficient against Omicron, but we assume that’s not a conversation Rodgers actually wants to have.

As you might imagine, there were some reactions to Rodgers’ appearance, comments, shirt, and just about everything else.

Aaron Rodgers: There haven’t been legitimate convos about COVID-19 treatments. Health officials and the vaccines : pic.twitter.com/6mgrKmRS3R

Cancel culture is so real and oppressive towards people like Aaron Rodgers that he's the favorite to be voted league MVP again by the woke mob media. https://t.co/LpU0T0TAHf

"If you're asymptomatic, right, and you test positive…who are you endangering if you have zero symptoms and tested positive?"

OTHER PEOPLE, AARON. IT'S A HIGHLY CONTAGIOUS RESPIRATORY VIRUS.

You're not this stupid. You're just arguing to the conclusion you want to reach. https://t.co/7UZgMLHqI0

We know Rodgers really doesn’t like it when people disagree with anything he has to say, so we’re sure this will come up again next Tuesday when he’s back on with McAfee. Fun.