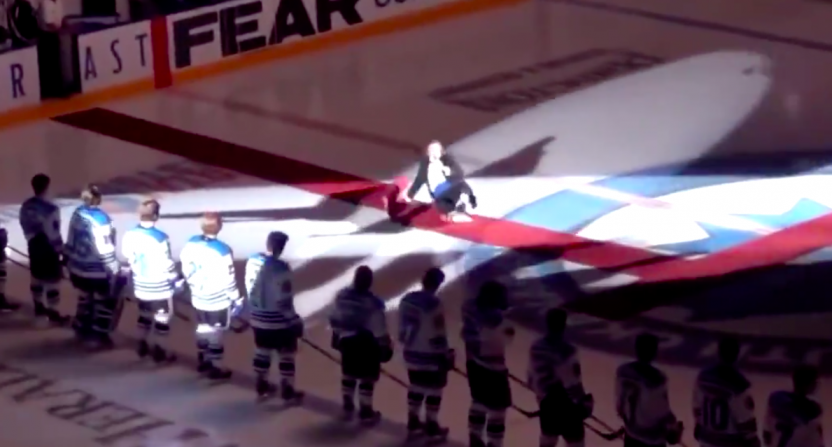 Mark Donnelly is best known as the national anthem singer for the Vancouver Canucks, which he’s done every season since 2001. He’s going to have to find something else to be known for now as he’s been fired by the NHL franchise following news that he would be performing at an anti-mask rally in Vancouver this weekend.

British Columbia banned gatherings of 50 people or more back in March due to the coronavirus pandemic and, in November, extended that ban to all social gatherings. That hasn’t stopped some from protesting the order and this weekend’s plans include the “B.C. Christmas Freedom Rally” which is expected to push back against anti-mask and anti-gathering orders. The event is also expected to be attended by anti-vaccine speakers, amongst others.

Donnelly, it was announced, would be performing the Canadian national anthem at the rally.

“I sing ‘O Canada’ as a sign of unity and strength for all Canadians,” Donnelly told Postmedia. “The true north strong and free.”

Originally, theCanucks organization simply attempted to distance themselves from the singer with a statement.

“Mark Donnelly is acting independently and we hope the public understands he is not representing the Vancouver Canucks,” said COO Trent Carroll. “We encourage everyone to wear a mask and to follow the provincial health orders.”

However, once the news was confirmed, Canucks owner Francesco Aquilini took to Twitter with a link to the Vancouver Sun article and the note, “Hey @VancouverSun change the headline to “Former Canucks anthem singer.” #wearamask“

Team officials also confirmed the move to the Vancouver Sun afterward. Another official told CBC  that “you are safe to say his days are over.”

This isn't a case of unfairly firing an employee. The guy is a very public face of the Canucks, and he's using his position to make a statement that could be misconstrued as also an endorsement by his employer. If he thinks it's unfair, he can sue. Good move, @fr_aquilini https://t.co/zmlc3nz5EP

This isn’t entirely out of the blue. Donnelly has a history of courting controversy with his decisions to sign the national anthem at certain events. In 2012, he sang the anthem for an anti-abortion caravan when it came through Vancouver.

Donnelly was born in Vancouver and he lives with his wife and nine children in White Rock, BC. And while he will likely find plenty of other opportunities for himself out there, it’s a shame we’ll never get a chance to re-live magic like this again…