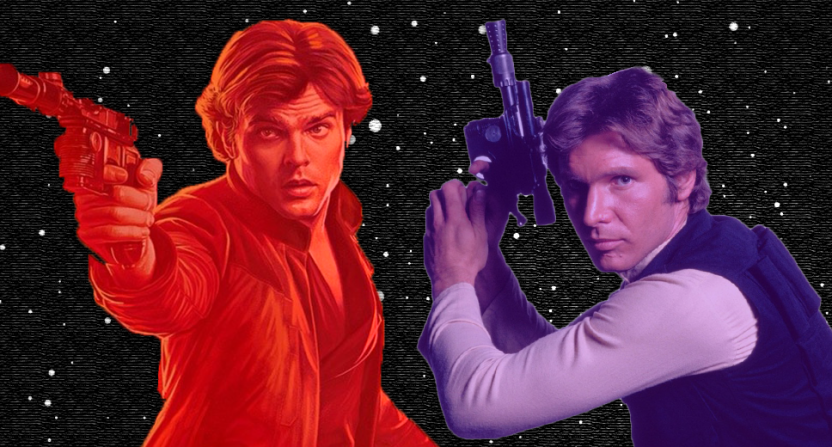 The tales of Han Solo’s younger days are about to be told on the big screen with the release of Solo: A Star Wars Story. With Han Solo being one of the ultimate characters in the Star Wars universe, the backstory of what led Solo on his path to eventually teaming up with the Rebel Alliance has a number of stories to potentially shed some light, like the legendary Kessel Run, his relationship with Lando Calrissian and Chewbacca and more.

Appearing in four Star Wars films, Harrison Ford has been at the center of many iconic moments in the Star Wars saga as Han Solo. A number of great one-liners have been delivered by Han, including the famous “I have a bad feeling about this.” Ford has shown the ability to be charismatic, witty, and rough around the edges when needed as Solo, because that is who the character is supposed to be. A space pirate of sorts always on the lookout for his next payday, but one who will also be loyal to those he trusts and feels the need to protect.

In honor of the release of Solo: A Star Wars Story, a film which will shed some light on Han Solo’s past before he crossed paths with Obi-Wan Kenobi and young Luke Skywalker in a bar on Tatooine, let’s take a look back at some of the finest moments of the galaxy’s most famous stuck-up, half-witted, scruffy-looking nerf herder.

Aside from Darth Vader telling Luke Skywalker of their relationship, one of the most iconic lines from The Empire Strikes Back is delivered by Han Solo moments before he is frozen in carbonite and shipped off to Jabba the Hutt.

After being betrayed by his old friend Lando Calrissian, who was under pressure from Darth Vader and the empire in Cloud City to comply with their demands, Han is lowered into a chamber to be frozen in carbonite, where Bobba Fett will then ship him off to Jabba the Hutt. With his friends looking on in despair, Han glances back one final time. After Leia says “I love you” to Han for the first time, Solo looks back and responds in the most perfect way Solo could.

As scripted, Harrison Ford was to respond with “I love you, too.” Rather than stick to the script, Ford modified the line to “I know,” which is much more fitting for our abundantly confident Solo, who plays by his own rules time and time again.

The iconic scene for Han Solo was worked on between Ford and director Ivan Kershner, and it apparently led to some tension with the late Carrie Fisher, who legend said was upset about not being included in the changes to the scene. Of course, after the fact, even Fisher came to realize just how much the scene was improved as a result. After all these years, this particular scene is remembered and hailed as one of the top moments from the entire Star Wars saga as it blends the tension of the moment with a dose of humor as no other moment in the expanding franchise can mimic.

Shortly after Han Solo agreed to transport Ob-Wan Kenobi, Luke Skywalker, C-3PO, and R2-D2 to Alderaan in A New Hope, Greedo the bounty hunter approaches Solo. With a large sum being offered for the capture of Solo by Jabba the Hutt over an outstanding debt, Greedo thinks he has wrapped up Han just where he wants him.

Feeling threatened by Greedo, Solo fires off his blaster from underneath the table. Perhaps it was a lousy conversation anyway? The scene shows how ruthless Han can be when he has to be, setting up a bit of an anti-hero characterization for Solo. It sets the seed of doubt that Solo could potentially turn his back on Obi-Wan and Luke if needed.

Of course, this scene has also become one of the most controversial scenes over the years. Once George Lucas started flexing some visual effects enhancements for re-releases of the films, the scene was edited to show Greedo shooting first at Han. To a generation of fans, it would seem Solo was shooting in self-defense, thus changing the molding of the character significantly for some.

But, let history show, Solo was definitely the one to shoot first.

With the Rebels taking on the nearly impossible task of trying to thwart the Empire and take out the Death Star, Rebel ships are dropping like flies against the manpower of the Empire and an exponentially larger inventory of TIE fighters. With Luke becoming one of the last beacons of hope for the Rebels in a desperate mission, Darth Vader sets his target on his son when Vader is knocked off course by a surprise attack from – whom else – Han Solo in the Millennium Falcon.

Prior to the execution of the Death Star mission, Solo and Chewbacca were loading up the Falcon to move on despite pleas from Luke to help the Rebels in their battle. Up to this point, that is exactly who Han was, a space swashbuckler just out to get paid for his work and move on to the next task. Solo claims he only turned back to make sure Luke didn’t hog the reward all for himself, but the truth is Solo went back to protect his new friends from imminent danger, and he wasn’t afraid to fly right into battle to do so.

This is the moment that turned Han Solo into a true hero and shaped his legend in the movies to come.

“I thought they smelled bad on the outside.”

At the beginning of The Empire Strikes Back, Luke is lost outside in the freezing cold on the ice plant Hoth. After the rebel base decides they have to close the doors to the base and hope for the best for Luke the next day, Han Solo takes off against the advice of a rebel.

“Then I’ll see you in Hell,” Solo shouts back. That alone is a signature moment for Solo, as he once again showed he will go against the order of the rebels if he felt a need to do so to protect those close to him.

Solo eventually comes across his friend Luke and to protect the frozen Luke, Solo picks up the lightsaber and cuts open a dead tauntaun to provide some warmth for Skywalker. The decision was an intelligent one that shows Solo has life-saving skills and tactics in mind. Surely he has been exposed to the elements before and has had to pick up some life-saving techniques in his past to think of such a move to help Luke keep from freezing to death. But once again Solo brings a dose of humor to the dire situation when he reacts to the stench coming from the dissected tauntaun.

The death of Han Solo

In The Force Awakens, Solo has a handful of key moments. From his return with Chewbacca to the Millennium Falcon to taking on the role of mentor of sorts for Rey, and his reunion of Leia, there is no shortage of moments that remind you how charismatic and witty Solo can be. And while his rejection of how the force works to Finn is one of the more humorous moments in the film, it was his confrontation with Kyle Ren that served as the final curtain call for Solo that sends one of the galaxy’s top heroes off for the final time.

The impact of the moment is perhaps spoiled by the reveal earlier in the film of the parental relationship between Han Solo and Kylo Ren. Perhaps was too close to The Empire Strikes Back reveal between Darth Vader and Luke, but the moment is still dramatic.

For the first time, we hear Ren’s real name as Solo sees his son on a bridge on a First Order base and shouts “Ben!” It appears Kylo Ren was named after Obi-Wan Kenobi, who was referred to as Ben Kenobi by Luke in A New Hope. And just as it seems Solo may be able to turn his son back to the light side and come with them, the shadows grow darker and Ren ignites his lightsaber right through the chest of Solo.

Whether you expected it or not, the moment was still a bit jarring as one of the legendary heroes of the original Star Wars trilogy was killed off. The death of Han Solo is a bit of a controversial subject for many long-time Star Wars fans because of course, it is. It is worth noting Ford previously discussed killing off Solo in the original trilogy with George Lucas, so perhaps Ford agreed to come back for one more Star Wars movie but insisted he was done after The Force Awakens. Still, the moment still makes Ford sad. And later on, in The Last Jedi, a bit of Han Solo’s motives shined in Kylo Ren in the confrontation with Snoke when Ren uses the force to cut Snoke in half to save Rey from the powerful leader of the First Order.

The legacy of Han Solo will continue to live on in some form, but to what degree remains to be seen. With Kylo Ren still alive and well in the galaxy and trying to fight off his family, the connection to his father may still play a role in the future. And as long as Chewie is around with the Falcon, even if it is now to be piloted by Rey, the memories of Solo will not soon be forgotten. And now the opportunity to explore his past with Alden Ehrenreich taking on the role of the younger Solo. Will any more moments from Solo’s past be able to stand the test of time the way Ford’s portrayal of the character have for decades?