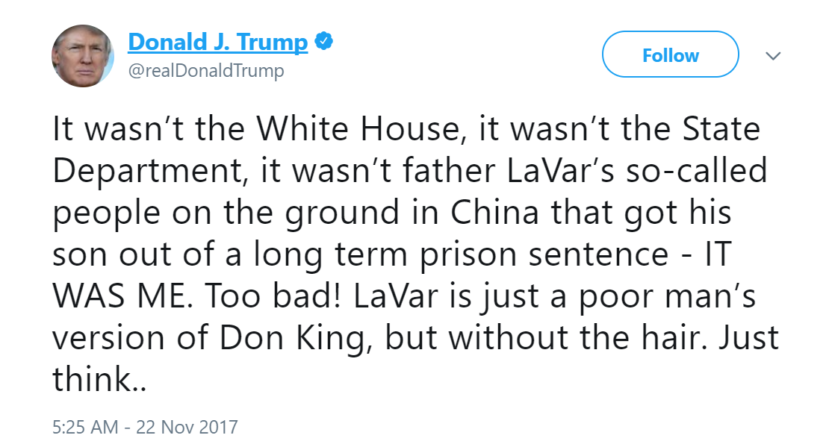 Early Wednesday morning, the President of the United States took time away from (in theory) leading the world to go in further on LaVar Ball.

If you’re searching for the looking glass, it’s way, way behind you.

Their feud was sparked when Trump (apparently) intervened on behalf of LiAngelo Ball and his two UCLA teammates after a shoplifting arrest in China. When asked for his thoughts on Trump’s assistance, LaVar Ball set his trolling sights on his biggest game yet:

But LaVar Ball knows a Big Baller Brand publicity opportunity when he sees one, and he had this to say:

“Who?” LaVar Ball had told ESPN’s Arash Markazi on Friday when asked about Trump’s involvement in the matter. “What was he over there for? Don’t tell me nothing. Everybody wants to make it seem like he helped me out.”

And we were off, with Ball’s comments leading to a Trump tweet on Sunday, and a horror-show turn on CNN on Monday. Still, with the news cycle being as short as it currently is, one might be excused for thinking it was over. Or that if it was going to kick back into gear, it’d be LaVar’s doing, seeing as how he’s the side of the equation that doesn’t get publicity for walking outside in the morning. (He’s close, but not there yet.)

Instead, we got this series of Trump tweets:

It wasn’t the White House, it wasn’t the State Department, it wasn’t father LaVar’s so-called people on the ground in China that got his son out of a long term prison sentence – IT WAS ME. Too bad! LaVar is just a poor man’s version of Don King, but without the hair. Just think..

…LaVar, you could have spent the next 5 to 10 years during Thanksgiving with your son in China, but no NBA contract to support you. But remember LaVar, shoplifting is NOT a little thing. It’s a really big deal, especially in China. Ungrateful fool!

Does…does Donald realize that LiAngelo isn’t in the NBA? Or is he saying LiAngelo would miss out on his NBA contract, in which case we can at least be thankful that Trump isn’t also spending time scouring Draft Express?

I’ll also point out that I really do love the President taking the time to properly capitalize LaVar’s name in the middle of firing off tweets that serve as evidence the President would leave citizens to rot in foreign prisons if they don’t pledge allegiance to him.

This is EXACTLY what LaVar Ball was looking for with first Big Baller Brand shoes promising to ship in 2 days. https://t.co/70e6SSjQZt

Trump didn’t stop there on his way through the sports section:

The NFL is now thinking about a new idea – keeping teams in the Locker Room during the National Anthem next season. That’s almost as bad as kneeling! When will the highly paid Commissioner finally get tough and smart? This issue is killing your league!…..

(Trump’s referring to this bit of news.)

It’s important to remember that there is no reason to believe whoever follows Trump into the White House won’t also spend his or her time in a similar fashion. This might just be how it is, from now on.

LaVar will inevitably respond, and so on, and so forth. Boats against the current and whatnot.