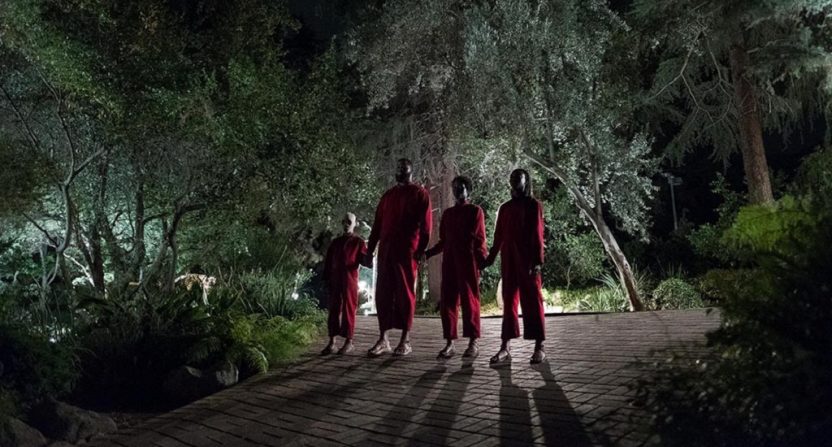 Quote: “Don’t worry. They’ll be here tomorrow. Or the day after tomorrow.”

Arctic could be the frozen younger brother of Cast Away. Overgaard (Mads Mikkelsen) is stranded after being the lone survivor of a crash. He’s settled into a daily routine of survival, living in the wreckage of a plane, making holes in the ice so he can fish for food and using a hand-cranked radio to signal for help. It’s boring, but he’s alive. His predictable existence is interrupted when a helicopter attempts to rescue him, but instead also crashes due to the snowy, windy conditions.

Overgaard rescues a woman, but she’s in desperate need of medical care. He decides to make a dangerous trek for help. Is this the right move, or will both of them wind up dead?

The sparse dialogue for this 98-minute film could probably fit on one page. Mikkelsen is the only person speaking, and it feels like he has about 10 lines. But Mikkelsen expresses plenty of emotion without saying much.

It’s easy to make a romantic comedy, but it’s hard to make a good one. Most rom-coms are predictable with cute dialogue and contrived over-the-top romantic gestures. While Plus One isn’t groundbreaking, it’s fresh, grounded, and funny. Think of it as When Harry Met Sally meets Four Weddings and a Funeral with a modern humor.

Alice (Maya Erskine) has just broken up with her boyfriend. Ben (Jack Quaid) can’t find the right girl. They find themselves in a predicament: a summer filled with weddings, but they’re both single. These friends agree to be each other’s plus ones. Problem solved, right? Of course, not. You know where this movie is going. While the plot might ring familiar, the jokes don’t. Powered by Erskine, a comic force of nature, Plus One has terrific energy. Quaid, son of Dennis Quaid and Megan Ryan, has the exact same smile as his father along with his charismatic charm.

Time travel is a common plot device, but it has never been used to tell a deeper story about racism. This Netflix and Spike-Lee produced film thoughtfully delves into the impact of police violence against African Americans.

C.J. and Sebastian are high school nerds who love science and have dreams of attending prestigious colleges. Their teacher (Michael J. Fox in a playful nod to Back To The Future) calls them as his brightest students. He also knows their latest project is about exploring the possibility of time travel. He reminds them of the ethical and philosophical conundrums associated with such an invention. Of course, this is more than a hypothetical. C.J. and Sebastian successfully build a time machine. It’s fun and exciting until her older brother is shot by cops.

A sad and desperate C.J. believes she possesses the power to save her sibling. Of course, time travel – and real life- isn’t that simple.

Quote: “I’m not good with people.”

The incarcerated criminals in The Mustang have committed horrible crimes in a matter of moments. Terrible things can happen in seconds. And now these felons have nothing but time to think about life-altering choices. Quick-tempered Roman Coleman (Matthias Schoenaerts) has been locked up for 12 years due to brutal beating that left his wife permanently brain damaged.

Coleman is exposed to a rehabilitation program where convicts train wild horses in order to sell them at auction. The story is fiction, but the program is real. The Nevada Department of Corrections system gathers up mustangs.

You can call The Mustang a redemption story if you want. But these are violent people trying to find humanity by connecting with animals. This Robert Redford movie is more about anger and how it shapes people and the decisions they make.

Dev Patel… with a gun! Patel ditches his usual nice guy roles to portray a tough guy for hire. His latest assignment: kidnap a bride-to-be (Bollywood star Radhika Apte) the night before her wedding. He skillfully eludes authorities by changing cars, modes of transportation, and identities. The Wedding Guest could’ve easily settled for being one long chase scene. But it keeps you guessing. Patel’s character is a man of mystery, and the woman he’s abducted has secrets of her own.

At its core, The Wedding Guest is a film noir. There’s the antihero protagonist. There’s a femme fatale whose alluring beauty causes him to make decisions he wouldn’t normally make. The Wedding Guest could also be interpreted as a commentary on how society treats women as property. Everyone is trying to possess a woman who should have the right to make her own choices.

Quote: “I’ve lived so long in imaginary worlds I think I’ve lost sight of what is real.”

Kenneth Branagh stars as the Bard and directs a different kind of Shakespeare movie. He’s acted in or directed adaptations of Much Ado About Nothing, Hamlet, Henry V, As You Like It, Othello, etc. All is True isn’t based on Shakespeare’s works. Instead, it’s a reimagining of Shakespeare as a grieving, retired patriarch of a dysfunctional family. Branagh’s Shakespeare returns home to deal with two troublesome daughters, an unhappy wife, and a tragedy.

Admittedly, it takes a minute for All is True to get going. But once the bickering starts, you’ll be hooked. And there’s more comic relief in the first hour than there was for the entire two hours of Dark Phoenix. In a movie with acting heavyweights like Branagh and Judi Dench, the best performance comes from lesser known Kathryn Wilder. She’s in the two best scenes – adroitly combining a mix of sadness, regret and anger. Wilder is worthy of a best supporting actress Oscars nomination.

Quote: “Everybody wanted to meet Michael or be with Michael.”

If you watched both Abducted in Plain Sight and Leaving Neverland, chances are you noticed some disturbing parallels. There are commonalities in how alleged predators operate: earning the trust of the family, separating the child from that family, and not wanting to believe the worst in people.

Michael Jackson is dead and can’t defend himself. He was acquitted on criminal charges. And the accusers told completely different stories on the witness stand. However, the details in this HBO documentary reveal information that is so jarring, so graphic, and so specific, it’s hard to believe that nothing happened.

Leaving Neverland is extremely uncomfortable to watch. At one time, Jackson was the most famous person on the planet and most beloved. His childlike behavior and musical talent made everybody love him. Many still do. Did all that power corrupt him and help him commit the worst thing you can do to children? We’ll probably never known the complete truth.

Quote: “We haven’t done anything! We haven’t broken any rules.”

For reasons previously mentioned, this is the best comedy of the year. In a year filled with sequel fatigue, Booksmart is a welcome respite. It’s amazing what a hilarious script, well-developed characters, and sharp directing can do. Rookie director Olivia Wilde gives us a new look at the high school comedy. It’s more than the female equivalent of Superbad. Yes, it stars Jonah Hill’s younger sister Beanie Feldstein. But it’s a nuanced depiction of female friendships and sexuality, while celebrating the joys and heartbreaks of being young.

It’s an easy movie to fall in love with. The jokes come fast and furious. The two leads (Feldstein and Kaitlyn Dever) have great chemistry. All the adults have meaningful roles as well. They’re not just cardboard cutouts trying to cramp everybody’s style. This is so good. Plus, that Cardi B joke will never not be funny. Hopefully Wilde gets more directing opportunities.

Quote: “These woods, they can be a crazy place.”

The best kind of thrillers are the ones where we can see a little bit of ourselves. How one simple mistake or miscalculation can lead to misadventure. Rust Creek’s heroine literally makes a wrong turn that puts her in peril. A simple road trip from a small Kentucky college to a job interview in Washington D.C. wasn’t supposed to be this difficult. But when Sawyer (Hermione Corfield) gets lost and possibly sees something that she shouldn’t have seen, that leads to an encounter with drug dealers.

Now this student is in a full survival mode, having to outwit a meth gang. Breaking Bad hipsters! The only complaint: Sawyer is a little too resourceful. That’s one tough, smart track athlete. You go, Kentucky woman! She’s also curious. Some of the best scenes involve her asking the meth cook about his craft. Rust Creek feels like a throwback to 90s thrillers like Red Rock West or The Last Seduction.

Jordan Peele’s first two films are as good as any for a director, especially since his background is in comedy. Get Out is the best – and probably only – movie ever made about liberal racism. Us isn’t as obvious, leaving a lot more open to interpretation. What’s with the rabbits? What’s with the Hands Across America references? What’s with the gold scissors? You probably have several questions. That’s okay.

Us is entertaining and creepy AF. The idea that we all have doppelgangers living a lesser version of our lives is unsettling. What makes it all work is Lupita Nyong’o dual role as Adelaide and her twin Red (complete with a terrifying voice). One is desperate to avoid the inevitable reckoning coming her way. The other is desperate for the reunion. Us is a riveting illustration of the Haves vs. the Have Nots. Whatever conclusions you draw from it, the ending will leave you wondering about the film for a long time.