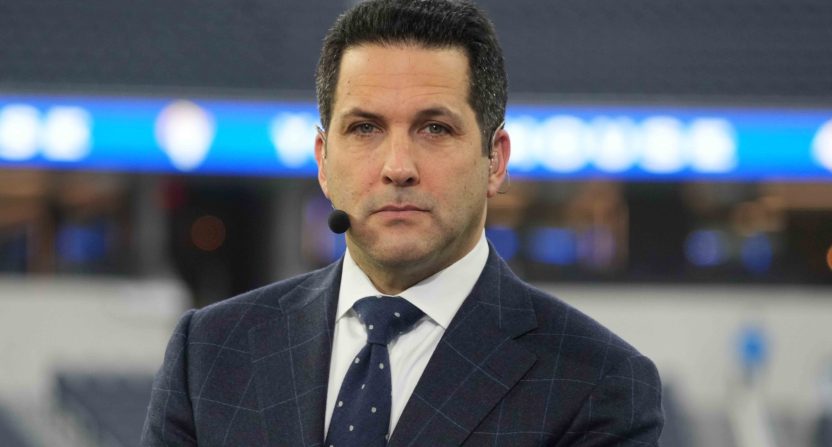 Tuesday, Ben Strauss of the Washington Post published a feature on Schefter that details the ESPN NFL insider’s rise to fame and details his reporting practices, some of which seem to be rubbing the rest of the journalism community the wrong way.

Schefter, who was discovered to have handed over editorial access to former Washington Commanders executive Bruce Allen in last year’s NFL email leaks, talked about how he spends a lot of money on gifts in order to build relationships in NFL circles. Specifically, he notes that he spent $16,000 on chocolates one year.

This bit about Adam Schefter's business practices might be one of the sneakiest one-sentence takedowns I've ever seen in a newspaper profile, goodness gracious.https://t.co/ID3F1wgrlO pic.twitter.com/Qcb1PRyUFX

There’s also the fact that Schefter, who does commercials and sponsorships, also invests in the same gambling company as Patriots owner Robert Kraft, which would appear to be a conflict of interest to many journalists. Schefter disagrees and uses a very roundabout analogy to justify it.

ESPN's Adam Schefter & Pats owner Bob Kraft were investors in same gambling company, which Schefter dismissed as inconsequential. “If an NFL owner owns Apple stock, do we share an investment there, too?” he asked.

What a disingenuous false equivalence.

Schefter also noted that he would often send his stories to NFL owners, executives, and coaches at the same time he was sending them to ESPN’s news desk.

There isn’t much in the article that is going to make people feel better about Schefter and his practices, especially given the many concerning comments and obtuse messaging he’s shared in the recent past. Last November, he tweeted about an impending lawsuit against Dalvin Cook as well as other tweets that seemed to be transparent attempts by agents to generate buzz for their clients. In the months that followed, Schefter confused everyone by offering conflicting reports on the same topic, had the Tom Brady retirement fiasco, inferred that the “truth” was revealed when a grand jury decided not to pursue criminal charges against Deshaun Watson, and announced the death of Dwayne Haskins with a tweet that focused on his “struggling” in the NFL.

Of course, ESPN also recently re-upped Schefter for five years and doesn’t appear to be in any rush to lose the news-making ability he brings to Twitter and their networks.

Still, the profile certainly caused a lot of people to offer strong reactions about Schefter and his journalistic integrity.

A must read, with a month's worth of material for journalism school seminars: https://t.co/Waxmu1QOYa

Via @JimmyTraina on WaPo profile of Adam Schefter: "The story points out that Chris Mortensen once turned down a request to do a live ESPN hit on Christmas Day, yet Schefter agreed to do it. Personally, I think Mortensen is the one comes out looking good there." https://t.co/1A9UZRQ4PB

The great Adam Schefter profile in the @washingtonpost shows what I've always said about "Insiders:" They're not actual journalists.

How can I become a source for Adam Schefter? https://t.co/RLBhNF0ZHf