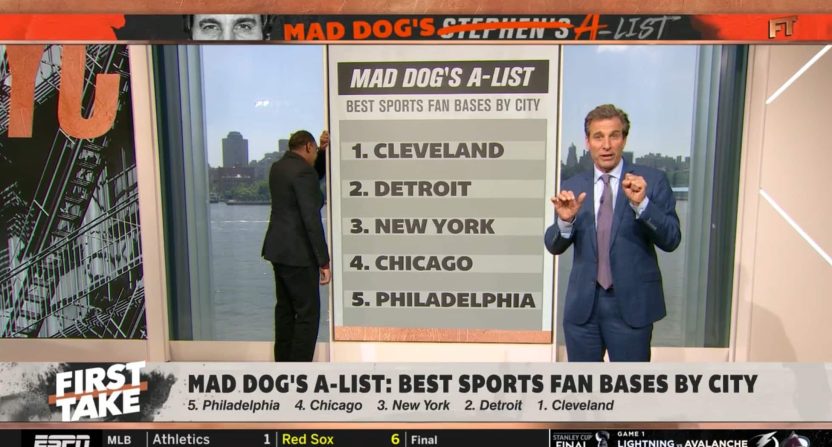 Chris ‘Mad Dog’ Russo has always been known for his hot takes and that’s exactly what he provided on Wednesday’s edition of First Take on ESPN.

Russo took over co-host Stephen A Smith’s “A-List” segment, where he typically lists a top-five on a certain topic. Russo used the space to detail his top-five best sports fan bases by city.

Do you agree with this list? Did your team make the cut from @maddogunleashed? 🤔 pic.twitter.com/JlbMddNlSN

Russo said the basis of his rankings was loyalty and energy of the fan base, and not based on the city’s teams’ performances.

Russo started his list by putting the city of Philadelphia in his number five spot and explained that he would have put them a little higher but the market size isn’t big enough to support the energy of the fans in attendance.

He then put the Chicago market at number four and somehow still proceeded to blast the city’s fanbase in the process.

“They are a little soft to me,” said Russo. “They don’t boo, everything is great. ‘Hey everything is great, let’s go to Wrigley Field, have a couple of beers, and watch the lousy Cubs.’ That is the reason that I won’t go higher here.”

Russo then put New York as the third-best sports fan base and said that the city is too “event-oriented” and that it won’t support its teams if they are having a bad season.

His choice for the second-best sports city was Detroit and he praised the city for its grit and loyalty to its teams.

“This is a hardcore sports city,” said Russo. “They have their four teams, they love their teams and they are loyal. They show up and it is a blue-collar city. They know what they are talking about.”

He then revealed that his number one sports fan base is Cleveland, describing the city as a gritty fan base that “doesn’t pretend it is anything other than what it is.”

This choice of Cleveland as the top sports city clearly angered Stephen A. Smith, as he gave a very passionate response.

“You have the city of Cleveland as the number one fanbase? You have got to be kidding me. Oh my god, this is an abomination. I mean, you have outdone yourself here. It’s a horrible list,” said Smith.

This topic was always going to upset some fans out there, as naturally, everyone thinks that their sports city is the best. Many in the sports world took issue with Russo’s list.

Chris Russo has obviously never been to a game in Chicago if he thinks no one boos at games https://t.co/g8WT99AhlX

For a guy who loves Bob Cousy as much as Mad Dog does, I would've figured there'd be more love for Boston in here. https://t.co/slfdRRH9os

Russo penalized Philadelphia because the 76ers had a small crowd during a Game 7 in the early 1980s, the most Mad Dog thing imaginable.

Meanwhile, Cleveland fans clearly feel that Russo was right on the money with his stance of Cleveland being the top sports city.

I’vealways liked @MadDogUnleashed he was on the old cold pizza as a guest and his knowledge of the 54 Indians was incredible. Watch yourself @stephenasmith 🤣🤣🤣 https://t.co/HzEGu9YT5C

100% nobody rides with Cleveland more then our fans. And boy have we gone through a lot. https://t.co/q4ntU6FJSz

Love my guy Mad Dog nailing this. Steven A lost in the soup on this one… https://t.co/fwliv4IUog

Mad Dog! I see you 👀 pic.twitter.com/fhO7v9IzKw

This is clearly a very subjective topic and there is no obvious right answer. However, based on loyalty to their city and passion alone, it is surprisingly not an awful list from Russo, despite the criticism that he has gotten for it.