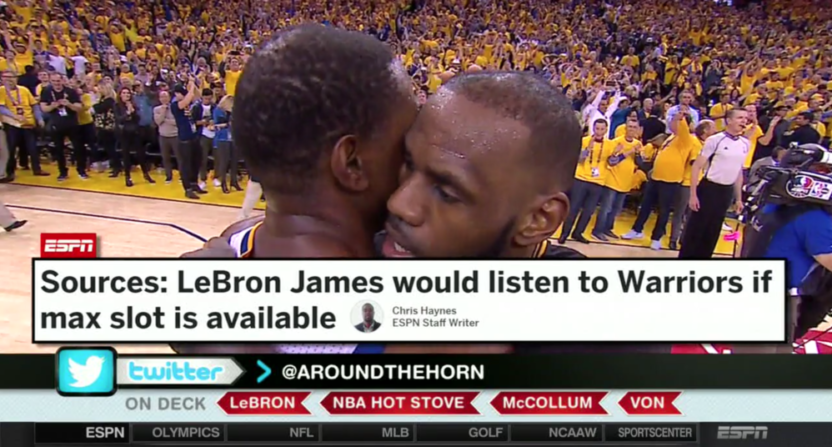 You guys! LeBron could end up on the Warriors next year. OMG! Insane, right! Let’s fire up the takes machine.

If you’ve been online, watching TV, or listening to the sports talk radio today, that’s been the lead story across most national programs. How did this start?

Chris Haynes filed a story “Sources: LeBron James would listen to Warriors if max slot is available“.  Oh? Go on…..

“If the Golden State Warriors can create a max salary slot this offseason, the defending NBA champions could position themselves to secure a meeting with LeBron James, league sources told ESPN.

There is no indication that Golden State is evaluating such options to acquire the Cleveland Cavaliers star at this time.

Out of respect for the Warriors’ winning culture, James would listen if Golden State explored ways to clear the necessary cap space, sources said.”

So basically hypothetically LeBron would take a meeting with the Warriors if they did something that they are almost 10,000% not going to do. I would like to note at this time that out of respect for Kate Upton and her amazing personality, I’d grab coffee with her if she wanted to explore pursuing a relationship with me, should she break up with Justin Verlander and want to date a husky not famous Chinese Jew.

But wait! Maybe the Warriors COULD do this. I mean it’s LeBron so maybe they’ll hear this stupid report and consider it? Except that’s just not even remotely plausible. 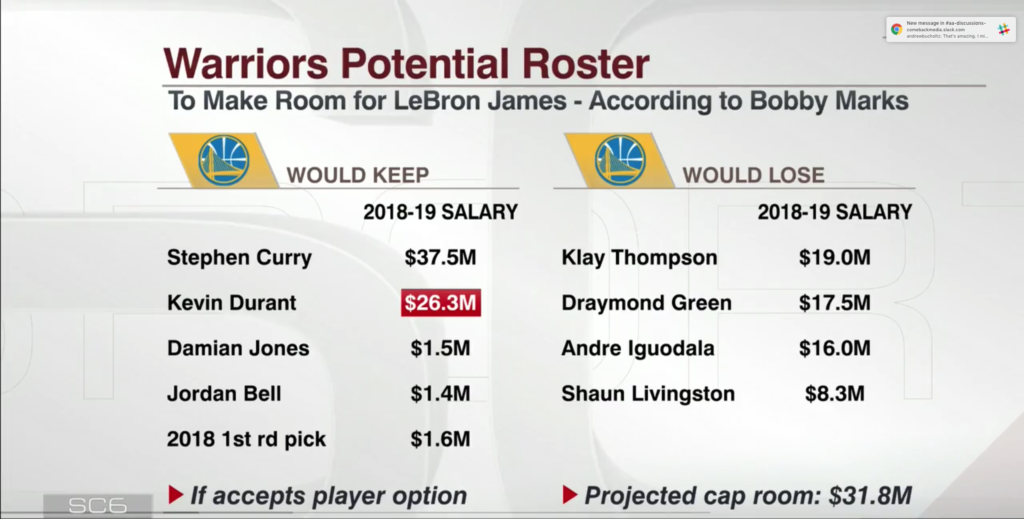 LeBron is insanely good. The most obtuse person at your place of work knows this. But the Warriors would not be better if they lost all of the guys above to make room for him (and again this would be without the guarantee you’d even land him).

I am not the first person to realize how stupid of a hypothetical this is. Ray Ratto penned this piece and I’m just happy he didn’t suffer a stroke while doing so.

“This, then, is idiocy of the first magnitude, something that Joe Lacob and Bob Myers should consider only if they have conspired to have their brains replaced by turnips. In fact, it sounds like an editor (and/or producer) having an idea that should have died a hideous death somewhere between cerebrum and larynx.

The story, which Haynes makes clear is entirely speculative, merely says it could happen, which is not really a standard as much as it is a drunken fantasy – a closing time drunken fantasy. “

Kyle Koster over at The Big Lead was quick on the draw knowing how this would play out today.

“But it’s damn fun to daydream about James pulling the most heelish of his many heel turns. James-to-Golden State will undoubtedly be the biggest story of the day, a shining beacon of hot content to drive conversation.”

And despite this being an almost totally bankrupt story, my oh my did this get a lot of mileage today.

From early editions of SportsCenter:

From #TheJump: The truth about LeBron, the Warriors and what's actually at stake for Cavaliers fans right now. pic.twitter.com/RkpDxcV2pK

And into the popular afternoon block of opinion shows where it lead off on most programs because IT’S SO DAMN NEWSWORTHY!  But it’s okay, guys, because everyone is saying it’s ridiculous! Here is SportsNation:

And right out of the gate, let’s have FOUR capital J journalists debate this one too on Around The Horn.

Kornheiser and Wilbon at least made this the third story in the A block of Pardon The Interruption.

And just in case you hadn’t had your fill yet, SC6 was doing promos all day letting you know they were going to give their hip take on this craziness. My favorite thing here is that The Bottom Line is basically scrolling “This story is bullshit” right before Michael Smith introduces it in the promo.

And then they did just that to lead off the show.

So you get the point, and may be wondering, “Dude….who cares? Why are you saying this is sooo bad?”. Good question, very intelligent reader who decided to actually read this whole article.

This is a manufactured story without much behind it. It’s a headline (a dubious one at best) and nothing more. Nobody at ESPN thinks LeBron will go to the Warriors but they know the mere tantalizing headline combination of “LeBron” + “Warriors” is stimulating enough to drive pageviews and ratings.

So from the top down, every producer has to feature this prominently and then it’s the talent’s duty to frame it responsibly and not come off like Stephen A Smith talking out of his ass. God only knows what he said this morning.

All media companies do this. We do this. A huge chunk of ESPN’s original programming strategy relies on doing this.

But it has to be done within reason. A story has to have some viability and meat on the bone to get the ESPN media cycle treatment. This doesn’t…….at least at the level to warrant leading off every damn show the network has.

If this was another prominent free agent and or another team, this gets buried. In fact, I don’t even know if it gets reported on national programs. And while ESPN has responsibly thrown adequate cold water on this, they know we live in era where people flip their shit reading headlines only. They don’t click through. Up until last month I lived in the Bay Area, and my social media feeds are filled with Warriors fans hot taking the shit out of this. I don’t think many of them actually read or watched anything despite ESPN’s best efforts.

I get it. Filling 24 hours of programming is tough. But when you fill, I don’t know, six of them with such a flimsy hypothetical, you’re doing a disservice to sports fans who still value substantive sports news and discussion. Maybe that demographic is shrinking, but I’d like to think it’s perhaps programming decisions like this that is partially the culprit in that trend. I’d like to think ESPN can more moderately and discriminately fan the flames of these stories so fans like myself don’t find themselves disenfranchised with such a concerted effort to not just embrace, but create debate. Until then it’s Mad Men re-runs for me, with an open invite to Ms. Upton.