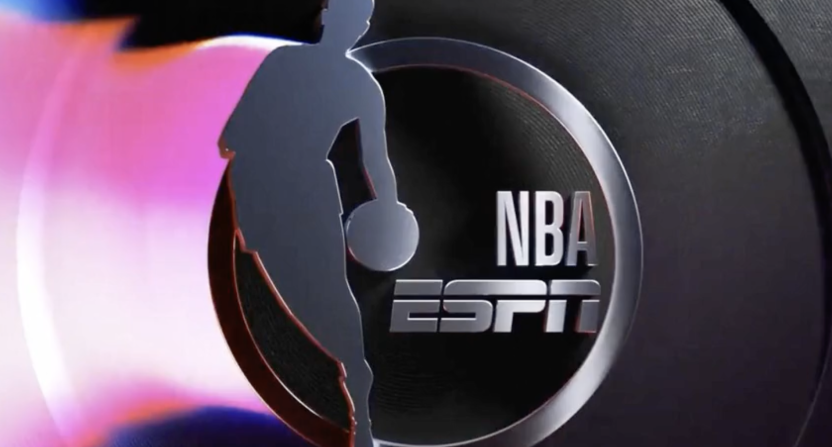 NBA coverage is going to look a bit different on ESPN this season. It’s going to sound a little different too.

ESPN unveiled its new “global creative brand identity for NBA for its NBA coverage across all screens and platforms” on Tuesday. The revitalized look and feel of ESPN broadcasts will showcase “an artfully crafted future-forward animation and editorial look and sound.”

Here's a look at some of the new graphics package ESPN will use for NBA coverage this year. More info in their release: https://t.co/1wqV6q1EDO pic.twitter.com/CJBXcXolKj

The new NBA branding, which also includes a new theme, will be shared across all of ESPN’s NBA properties. We all know how important a good theme song can be and any sports fan will immediately recognize the iconic “Roundball Rock” theme song that played during NBC’s NBA coverage in the 80s and 90s.

As for ESPN’s new theme song, they say that their strategy was to “find a theme that would complement the energy of the young stars across the NBA and the new package look for NBA on ESPN.” The end result? A “hip hop-based concept with the power and energy synonymous with ESPN’s NBA Productions.”

New ESPN NBA theme song or remix of an instrumental from a Rocky movie? pic.twitter.com/aJAmQ4xtif

You probably have a pretty song opinion on whether or not you like the new theme and you better believe NBA Twitter had its own thoughts as well.

This sounds like something Darth Vader slips on when he's feeling a little funky on Friday evenings pic.twitter.com/0WFcC03gpp

I dig it, honestly think it'd work even better as a pro wrestling entrance theme. https://t.co/vVKm2YPwtA

ESPN’s new NBA theme song may grow on me, but for now all I hear is video game main menu music.

John Tesh is rolling over in his synthesizer.pic.twitter.com/BHkxy6LyDZ

The new identity debuts on Thursday beginning with NBA Today, followed by NBA Countdown, and the doubleheader featuring Brooklyn Nets vs. Miami Heat at 7:30 p.m. and Los Angeles Lakers vs. Minnesota Timberwolves at 10 p.m.