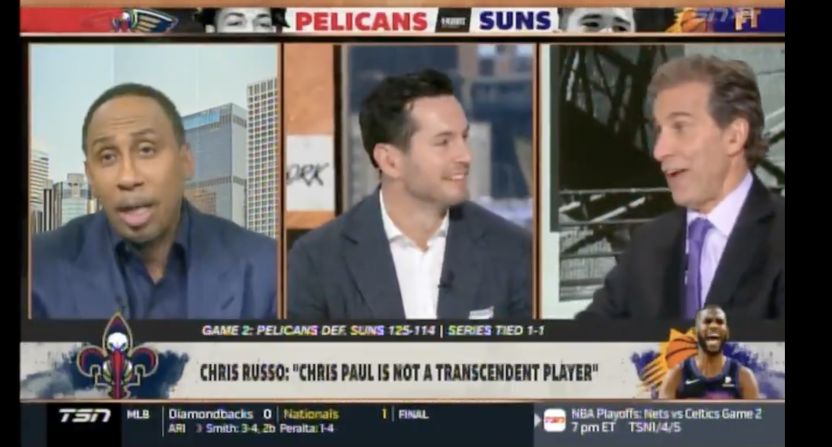 The battle over the best players in NBA history spans generations. While many fans will debate Michael Jordan vs. LeBron James, there’s also a neverending discussion about whether or not the pioneers of the NBA should count when it comes to compiling the list of best players in league history.

While players like Georgia Mikan, Bob Pettit, Oscar Robertson, and Jerry West are considered some of the greatest to play the game, many wondered if those players would be considered good had they played the kind of game that modern NBA stars contend with. Specifically, if they had to measure up with the NBA players of the 1980s, 1990s, or today’s game, would they still be great?

That was at the heart of today’s discussion on First Take when JJ Redick joined Stephen A. Smith and Chris Russo on the topic of Chris Paul and where he ranks among the best point guards in NBA history. Russo, an admirer of the old NBA days, brings up Boston Celtics legend Bob Cousy, who played in the league from 1950 to 1970, winning six champions with the squad.

While Cousy is fondly remembered as one of the pioneers of the NBA and one of its best all-time players, Redick was not buying what Russo was selling.

“Well, he was being guarded by plumbers and firemen” – JJ Redick

“Let’s celebrate Bob Cousy in his era, but you cannot compare pre-1980 with the modern NBA,” said Redick.

“Oh yes you can,” responded Russo, who then laid out his bona fides, specifically citing one stat that he thought might sway the former NBA player.”

“Well, he was being guarded by plumbers and firemen,” Redick chided him and smirked.

“That is true,” chimed in Smith, who had been watching all of this play out from the sidelines.

One of the most interesting parts of the way NBA folks reacted to the clip is that many of them saw themselves siding with Redick, which felt strange considering he was among the many Duke basketball players that so many people loved to hate. And they noted that in their reactions.

JJ Redick going from one of the most hated basketball players on the planet in college to fighting against Cousy evangelists is one the most miraculous redemption arcs I’ve ever witnessed. pic.twitter.com/pbDtMPy4yx

First Take needs to go ahead and make @jj_redick a permanent co-host whenever talking basketball.

Or just give him his own show to host. Todays episode was the best one they’ve recorded in years lol

“If Kyrie was teleported to a 1960’s Finals game, they would look at him like he was a wizard” pic.twitter.com/LKk3UcGlk1

JJ Redick on ESPN First Take is one of the best decisions that ESPN has made in the past five years.

Lmaoooooooooo JJ Redick is actually one of us on NBA Twitter. https://t.co/gJ30FlNLMc

JJ’s stock keeps growing amongst NBA and, seemingly, in the eyes of ESPN. And it’s appearances like this that will keep him in everyone’s good graces, except many Russo.