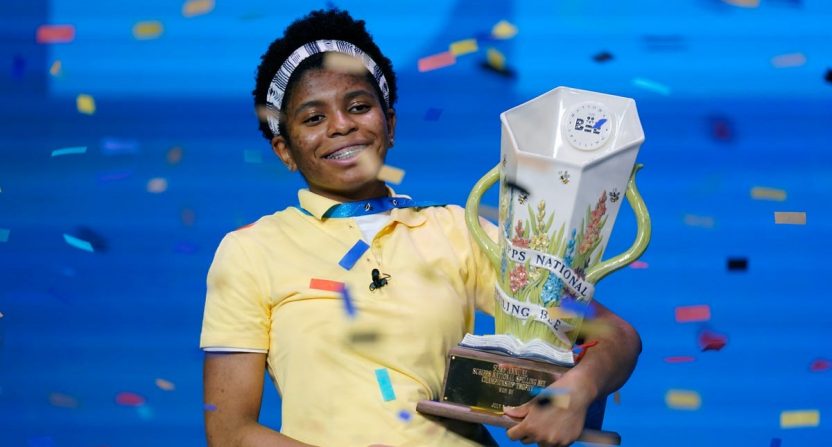 Zaila Avant-garde became a nationwide sensation Thursday night by winning the Scripps National Spelling Bee (and drawing that notice while Game 2 of the NBA Finals was also competing for TV viewers). She did so in only her second year of competition.

The 14-year-old Louisiana native won the event’s $50,000 prize by correctly spelling “murraya,” defined as a class of tropical and Asiatic trees associated with the Rutaceae family that have pinnate leaves and flowers with imbricated petals. (That definition includes a couple of words that could be used in spelling bee competition.)

Other words Zaila faced on her way to victory included fidibus, ancistroid, depreter, and retene. That last word could be a substance (a chemical isolated especially from pine tar, rosin oil, and various fossil resins, according to the New York Times) that finds its way into baseball as an approved sticky substance someday.

With her victory, Zaila became the first African American to win the competition. Jody-Anne Maxwell of Jamaica was the first Black contestant to win the contest in 1998. And in recent years, many people of color — particularly of South Asian descent — have won the competition. According to NBC News, Zaila’s victory breaks a streak of Indian-American National Spelling Bee champions going back to 2008.

But winning the National Spelling Bee might not be Zaila’s only moment in the national spotlight. (She calls spelling “her side hobby.”) We may be seeing her again soon in the years to come, starring on the basketball court.

Zaila already holds three Guinness World Records for most basketballs dribbled simultaneously, most bounce juggles (with four basketballs) in one minute, and most basketball bounces in 30 seconds (also done with four balls). She began practicing dribbling when she was five years old.

She showed off those dribbling skills in a 2018 Under Armour ad in which Stephen Curry launched his Curry 5 shoes.

You can see more of Zaila’s basketball skills on her Instagram account, which includes videos of her dribbling three basketballs while riding a unicycle.

Considered one of the nation’s top eighth-grade basketball prospects, the prodigy has told reporters she wants to attend Harvard, play in the WNBA and overseas, and perhaps coach in the NBA someday. According to ESPN, Zaila has eyes on winning a spot on the 2022 USA Basketball under-16 national team.

But her ambitions aren’t entirely devoted to basketball. She also aspires to be an archeologist or work for NASA. In the meantime, however, the WNBA has its eyes on Zaila.

She can ball out too, Zaila holds 3⃣ Guinness World Records for dribbling multiple basketballs

“Basketball, I’m not just playing it,” Zaila told NOLA.com’s Carlie Wells. “I’m really trying to go somewhere with it. Basketball is what I do. Spelling is really a side thing I do. It’s like a little hors d’ouevre. But basketball’s like the main dish.”

We’re definitely going to see more from Zaila. Life is an academic and athletic buffet for this kid right now, with a dazzlingly bright future on the table.