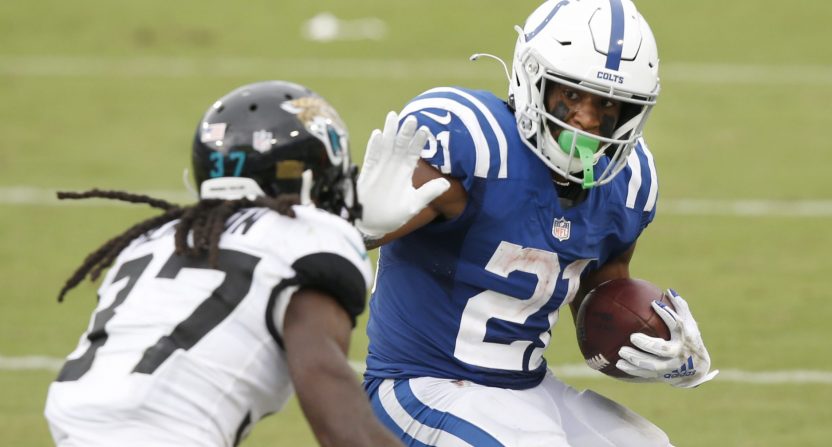 The conclusion of Week 1 is always a prime time for major fantasy-football roster changes. You likely already regret some draft-day decisions, and a lot of intriguing players emerged in Week 1. Who should you chase on the waiver wire ahead of Week 2? Here’s a rundown:

Jacksonville Jaguars QB Gardner Minshew II: He’s unlikely to win you your league, but the sophomore sixth-round pick is clearly the guy under center there, and he’s super efficient. Throw in that he’ll likely throw a lot with Jacksonville expected to trail often, and he could sneak into the top-10 or 12 at that position.

Indianapolis Colts RB Nyheim Hines: With eight catches, 73 scrimmage yards, and two touchdowns in Week 1, Hines is a no-brainer pickup if he’s available and you have waiver priority. Even if rookie Jonathan Taylor becomes the lead dog, Hines should get plenty of work with Marlon Mack down with a torn Achilles.

Los Angeles Rams RB Malcolm Brown: While Cam Akers and Darrell Henderson struggled, Brown picked up 110 yards and two touchdowns in the opener against the Dallas Cowboys. He’s an ideal third or fourth back with upside.

Los Angeles Chargers RB Joshua Kelley: It’s clear now that he’s the main partner for Austin Ekeler instead of Justin Jackson. He’s worthy of a bench spot if you lack depth in the fantasy backfield.

Jacksonville Jaguars RB James Robinson: Be careful here. The Jaguars aren’t good, and undrafted free agents are risky right off the bat. Robinson put up intriguing numbers against the Colts, but gained just 10 yards on his final nine carries

Washington Redskins RB Peyton Barber: Two touchdowns in the opener means you at least have to handcuff him to Antonio Gibson, or vice versa. He’s also a decent bye week fill-in with that scoring potential.

Tampa Bay Buccaneers WR Scotty Miller: I know it’s tempting to believe he could be Tom Brady’s Tampa version of Julian Edelman, but that’s not Miller’s game and he’s likely to take more of a backseat when Mike Evans is fully healthy. He’s worth a roster spot, but don’t expect him to be a savior.

Green Bay Packers WR Marquez Valdes-Scantling: This has to be tempting considering his 20 PPR fantasy points Sunday, but it was a ridiculous performance from the Green Bay offense that was likely an outlier. Neither MVS nor Allen Lazard are starting options in an ideal scenario, but take a shot here if you lack depth.

San Francisco 49ers WR Kendrick Bourne: It’s not looking great for Deebo Samuel, George Kittle isn’t 100 percent, and somebody has to get the work in the San Francisco pass-catching corps. Bourne was targeted five times Sunday. I’d scoop him up if those with higher priority are focusing on guys who put up much bigger numbers this week.