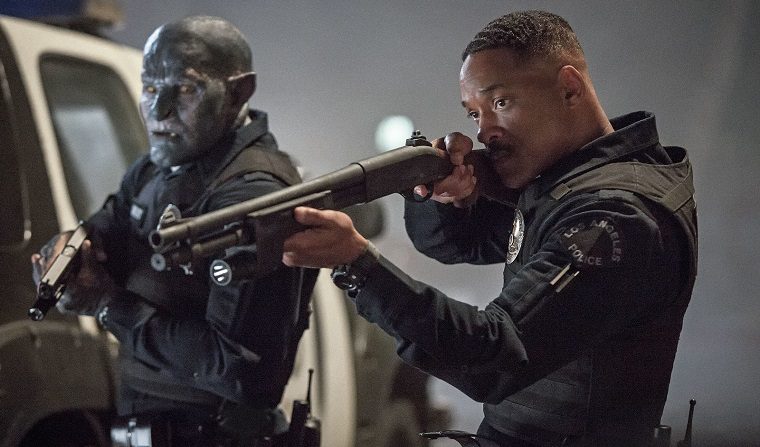 Back in July 2017, Max Landis (Chronicle, American Ultra) was doing an interview at Comic-Con in which he said that he wanted Bright, which he had written the script for, to be “my Star Wars.” It’s something Landis had apparently also said in a since-deleted tweet back in 2015. Landis has also spent a lot of time explaining what he dislikes about the two most recent Star Wars movies, The Force Awakens and The Last Jedi.

Perhaps there’s some kind of strange logic in there because if Bright was meant to be the start of a new fantasy saga to rival one of the greatest in cinematic history, and Landis doesn’t seem to actually like the Star Wars movies, then perhaps that’s why his latest is such an unlikable film as well.

Netflix went all-in on promoting Bright and you can understand why. Starring Hollywood megastar Will Smith, it’s the kind of action premise that should be showing up on 3,000 screens across the country this weekend, but is instead exclusive to their streaming service.

The company is trying to prove that it can compete directly with big studios and their wide releases by offering up big-budget entertainment worth staying home for. While Netflix certainly promoted Bright as if it would match up, the end result leaves more questions about the service’s ability to create good films to match their quality TV programs.

Bright takes place in a world just like our own, except that it is populated not just by humans but also orcs, elves, fairies, and I’m pretty sure we saw a minotaur in there too. Basically, if Lord of the Rings was our actual past from a couple thousand years ago, that would be the world of Bright. Taking place entirely in Los Angeles, the story follows Daryl Ward (Smith), an LAPD officer in an uneasy partnership with Nick Jakoby (Joel Edgerton), the first-ever orc cop.

After an incident leaves Ward questioning where Jakoby’s loyalties lie, the two get in over their head when they discover a mysterious elf in possession of a magic wand (“a nuclear bomb that grants wishes”). Everyone wants the wand, from the dirty cops in their precinct to a local Latino gang to a local orc gang, to a group of dark elves who want to resurrect a dark lord of some kind. There’s also some talk of a prophecy that might involve Jakoby and a whole lot of mythology tossed haphazardly into the mix along the way.

The thing that’s most striking about Bright is how little fun the movie is to watch. That’s shocking, given the material that we’re working with here. Though perhaps we’re given fair warning in one of the early scenes of the film where Ward is tasked by his wife to get rid of the fairy that is hogging their birdfeeder.

We’ve already realized that this film is going to be a fairly obvious race and identity metaphor, so it’s more than a little jarring to hear Smith say the words “Fairy lives don’t matter today” before clobbering it to death. Yes, he’s talking about a literal fairy but, in the context of the metaphor you’ve just created, that’s a bad look. Especially when there are multiple “gay panic” moments or jokes between Smith and Jakoby immediately following.

Watching Bright, you become acutely aware that the film is at once both excited and embarrassed by its own world-building. We’re given tantalizing imagery that gives us big ideas about the world of the film. We see a minotaur police officer helping round up a criminal. A dragon flies over the L.A. skyline at one point. We briefly visit the Elf District where they live a life of luxury and excess with a perceived disdain for the rest of us. And yet, all of those things are just moments in passing. You get to see that these things exist, but Bright doesn’t want to focus on them too much, lest you be distracted from the grimy plot of the movie. Whereas there’s an exciting and intriguing world to discover, this film would rather bog you down in less-interesting moments.

Strip away all of the magic and fantasy and you’re basically watching every other David Ayer cop film you’ve ever seen, only with bigger elements that seem to get in the way more than they help inform what’s going on. Ayer probably seemed like a perfect fit on paper to direct this film. The writer of Training Day and writer/director of End of Watch and Sabotage certainly knows how to tell stories about Los Angeles police officers. However, as he showed with Suicide Squad, which he wrote and directed, the more you pile onto the plate, the less coherent his storytelling gets. Ayer spends so much time delving into cop-related plot devices that end up being inconsequential (ex. – Ward being asked to secretly record Jakoby) that it robs us of the chance to understand more of the characters or the world they live in.

Think of all the wasted time in the first half hour of the film that could have served the overall story better. We could have learned more about the elfen FBI agent who mostly just stares at people. We could have learned more about the villain Leilah (Noomi Rapace) and her motivations, making her more than a cookie-cutter baddie. We especially could have spent more time with Jakoby and seeing what life was like for him outside of his job. Does he have a family? Where does he live? What does his family think about his chosen profession, which we’re told often is a slap in the face to his people? We have no idea.

Ayer’s tendency to go for what looks cool, rather than what makes sense, also rears its head. A character dies and then comes back to life without any real reason given. Whole gangs and groups of people appear in the most random places without logic. A favorite moment is when a gang leader in a wheelchair lifts his shirt to show Will Smith’s character his colostomy bag, but considering Smith is hiding behind and completely unable to see this, who was he showing it to?

In that same Comic-Con interview, Landis explained just how much time and energy he invested into the backstory of Bright.

In retrospect, it doesn’t seem as though Ayer was “low-key overwhelmed by it,” it seems like he was very much overwhelmed by it. You can feel while watching that there is so much interesting information to be shared about this world, but the film doesn’t want to let it in. It’d rather just show you the fifth gunfight in a row.

If anything, Bright makes the classic mistake of setting up a franchise (Netflix has already ordered a sequel) while forgetting to make the first movie a self-contained story that leaves audiences feeling like they can’t wait to see more. Call it the Street Fighter: The Legend of Chun Li problem. There probably are more interesting stories to tell in this universe, but if these are the kinds of stories we’re going to get, it doesn’t feel worth it.

Driving home just how uninterested the film is in its own mythology, Bright ends with Ward and Jakoby literally recounting the entire plot for a solid five minutes while the elf FBI agent looks on and barely says anything. There were so many things that you could have done with that time and instead we just spend five more boring minutes with the same two people we’ve watched the entire movie while all the cool stuff is happening around them. It’s a perfect coda to an imperfect film.