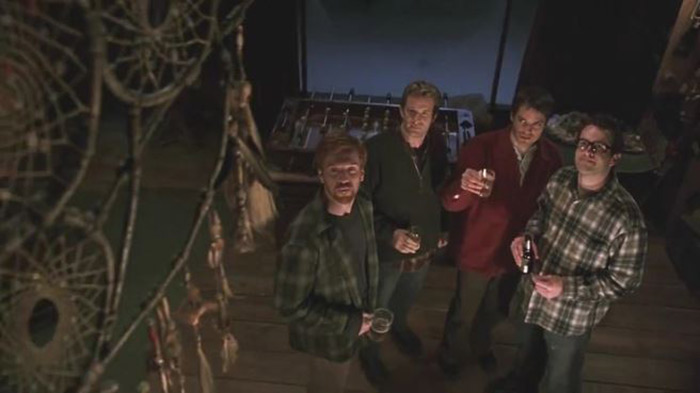 There are few things in life as fun as trying to recount the plot to 2003’s Dreamcatcher.

Based on the Stephen King book of the same name, Dreamcatcher is about four lifelong friends who are returning to a cabin in the woods for their annual hunting trip. They have a lot of inside jokes and shared phrases that are incredibly unfunny to everyone except them. Oh, by the way, they’re all psychically connected to one another because of one time when they were kids and they helped out a mentally handicapped boy named Duddits.

The friends help a very sick man they find in the woods and invite him back to the cabin. Meanwhile, a horde of animals run past the cabin seemingly in terror. They return to the cabin to find the man dead on the toilet. Inside the toilet is a creature they not-so-affectionally refer to as a “shit weasel” that appears to have burrowed out of the man’s rear end.

One of the friends, Jonesy, tries to escape but is confronted by a giant alien who then possesses him, locking Jonesy’s inner self in a memory palace in his mind. This alien takes on the persona of Mr. Gray and speaks in a posh English accent.

Guys, we’re barely into this.

Meanwhile, a military unit has locked down the area in order to hush up the alien invasion. They’re led by Colonel Abraham Curtis, played by Morgan Freeman, and he’s kinda crazy. His troops hunt down and kill a collection of the aliens in spite of them asking for mercy.

Two of the friends are killed by the aliens but Harry, the surviving friend who isn’t currently being possessed by an alien, discovers that Curtis plans to kill all the people in the area who might know about the aliens. He convinces the second-in-command to relieve Curtis of his command in order to prevent this.

Meanwhile, Jonesy realizes that Mr. Gray is looking for information on Duddits. Harry and the second-in-command make for Duddits’ home and find out he’s dying from leukemia. They bring him to a reservoir to stop Mr. Grey from seeding the local water with more “shit weasels” which would trigger a mass invasion. They’re able to get Mr. Grey to leave Jonesy’s body just in time as Duddits reveals himself to have been an alien the whole time. They fight and explode and, apparently, die. Jonesy and Harry kill the remaining “shit weasels” and save the day. The end.

If you haven’t ever watched the film, you might be a bit mad at me right now for spoiling the whole thing, but, honestly, it’s irrelevant to your enjoyment of this insane movie whether or not you’re shocked by the plot twists involved. If anything, knowing exactly what’s coming helps you to relax and appreciate the amazing efforts taken to make this film and all of the truly absurd choices that some very talented people made. And at no point, apparently, did any one of them take a step back and say, you know what, this is batshit crazy, you guys.

Dreamcatcher is not some fly-by-night production. The adapted screenplay was written by William Goldman (All the President’s Men, The Princess Bride). The film is directed by Lawrence Kasdan (The Big Chill, co-writer on The Empire Strikes Back, Raiders of the Lost Ark, Star Wars: The Force Awakens). The cast includes Morgan Freeman, Thomas Jane, Damien Lewis, Timothy Olyphant, and Tom Sizemore (back before that wasn’t a good sign). The budget on the film clocked in around $68 million. By all accounts, this was a major motion picture with major motion picture intentions.

So how the hell did it end up as a fart and shit-obsessed movie full of lines like “Jesus-Christ-bananas, some fuckarow this is turning into” that also cast Donnie Wahlberg as a mentally challenged man?

Like so many things, we can blame Stephen King.

You’ve heard the cliche before. Stephen King’s horror stories make for bad movies while his non-horror stories end up being great films (Shawshank Redemption, Stand By Me). In theory, you can see how Kasdan and Goldman might have looked at Dreamcatcher and thought it was the best of both worlds. A large section of the book is dedicated to the main characters as young boys growing up in Maine, dealing with bullies, and overcoming their fears.

Does that sound familiar? Stand By Me and It certainly think so. So you get the coming-of-age stories that do well theatrically while also getting a chance to lean into horror.

Unfortunately, that only works in theory, mostly because Dreamcatcher the book also works mostly in theory. Here’s what King himself had to say about the book in a Rolling Stone interview years later.

I don’t like Dreamcatcher very much. Dreamcatcher was written after the accident. [In 1999, King was hit by a van while taking a walk and left severely injured.] I was using a lot of Oxycontin for pain. And I couldn’t work on a computer back then because it hurt too much to sit in that position. So I wrote the whole thing longhand. And I was pretty stoned when I wrote it, because of the Oxy, and that’s another book that shows the drugs at work.

First of all, regardless of the output, that’s still impressive. Second of all, it kinda helps to make sense of all this craziness. Dreamcatcher takes a whole bunch of better Stephen King books, throws them in a blender, incorporates a ton of poop humor, and bakes in the oven only one-third as long as it should have.

It should also be noted that, according to King, the original title of the book was Cancer. Woof.

Even King’s best books are littered with characters who invoke strange quirks and use absurd jargon and catchphrases no one would ever say in real life. The trick to translating King to the big screen is to throw much of that stuff out and replace it with mannerisms and words that actual human beings use (which is part of the reason his non-horror stories work well on film).

Instead, Goldman and Kasdan leaned into the idioms and quirks that King peppered into his characters in Dreamcatcher. That’s how we end up with our heroes uttering phrases such as “Well, Fuck Me Freddie,” “Bitch in a buzzsaw,” and “This is turning into a real fuckarow. A real jobbanabba.”

That appreciation of the source material comes across in the performances, which swing between mildly hammy and full-on ham, egg, and cheese. Characters are constantly making choices that make no sense. The plot appears to be making itself up as it goes. And the ending, goodness the ending, where a special needs person they meet as children was actually an alien all along in a long game strategy to prevent an invasion by “shit weasels,” well, what do you even say? Other than… how did all of these people end up agreeing this was a good idea?

And that’s the question that should be running through your mind the entire time you watch Dreamcatcher. No better time than now to do it, too, as the film celebrates its 15th anniversary. It’s available on Netflix right now, so block out a little time to watch it and wonder with every strange one-liner, gross farting noise, and mind-breaking plot development how this so-bad-its-good-but-also-not film got made.