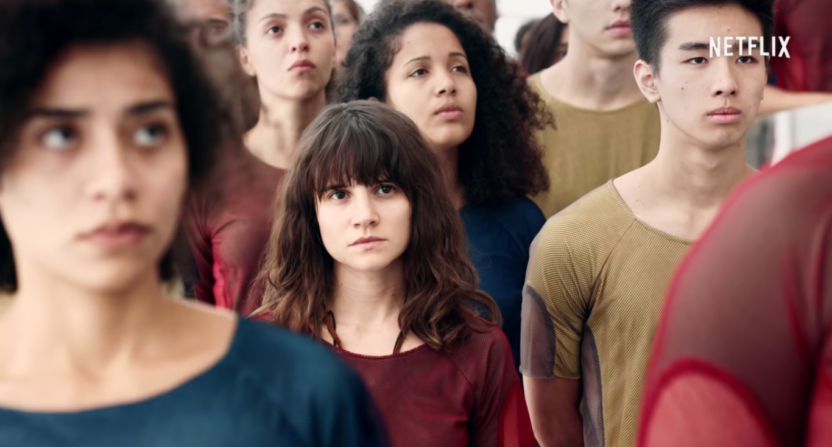 C’mon, you cretin. Surely you know that there’s good television being made around the world and not just North America, right? And now that we live in a world where the internet and streaming services make it easy to have access to content across the globe, it’s never been a better time to be able and see what the TV landscape looks like from Scandinavia to South America. Trust us, if you’re willing to watch shows with subtitles or deal with the fact that everyone has a different accent than you, your TV viewing life will be richer for it.

If you’ve exhausted your latest binge-watch and find yourself without a really strong next option, consider one of these non-American programs currently streaming on either Netflix or Hulu to fill that void in your life.

The American remake made it two seasons before it flamed out and personally, I think it’s because they chose the wrong border. The US show wanted to focus on the relationship between the U.S. and Mexico but the intention of the original version of The Bridge is less about the differences between Sweden and Denmark and plays more off of how they’re only slightly different. The murder case at the middle of the story is where the focus is.

The original premise is that a body is found lying across the center of the bridge that separates Sweden and Denmark and a detective from each side is assigned to the case when its becomes clear that this is only the beginning. Swedish police detective Saga Norén is suggested to have Asperger’s syndrome, which affects the way she interacts with everyone. Danish cop Martin Rohde is more of a free spirit who is capable of helping her learn how to connect to people while they attempt to solve the case together.

Three seasons of this show are now up on Hulu. If you get hooked, the good news is that a fourth (and final) season is on the horizon. And then if you really, really get hooked, you can start watching the British-French version of the show, The Tunnel, starring Stannis Baratheon (Stephen Dillane) himself over on Amazon.

We’ve gushed about Les Revenants before and we’ll do it again here. Based on the French movie They Came Back, the TV series basically retells that story but with more depth and time to get to know the characters.

In a small French town in the mountains, a random group of people who have died suddenly return at the same age they were when they died. That includes a young girl whose twin has grown up without her, a suicidal groom, a young boy who disappeared years back, and a serial killer. The show is great at maintaining the mystery throughout the first season, giving the audience clues and character connections over time that help to fill in the story without bogging it down in minutiae. It also doesn’t hurt that the cinematography is breathtaking and the score, performed by Scottish post-rock band Mogwai, is atmospheric and almost a character unto itself.

The second season speeds up to make up for the fact that it’s important child characters are growing faster than the story would probably want them to. It would have been nice to have been able to stretch things out for at least three seasons, but it’s still a worthwhile journey with two. You can find Les Revenants on Netflix.

America and the UK aren’t the only places doing good dystopia. The Brazilian drama 3% on Netflix offers up a great addition to the genre for those who are looking for a fix. The story takes place in the future where most people live inland in abject poverty. Every year, every 20-year-old gets a chance to the Offshore, where a virtual paradise awaits, so long as they can pass a series of tests called “The Process.” Of course, only 3% of those who take the test will pass it.

There’s certainly a lot of YA influence here and you’ll recognize a lot of the tropes at play. However, it doesn’t have the shine of those Hollywood adaptations and finds a way to feel authentic and real, which in turn gives it the kind of emotional weight often missing from those stories. There are lots of good twists and turns along the way and what sounds like a somewhat simple jumping off point becomes much more complex as the first season comes to a close.

Not every great foreign show need be a crime drama or science fiction tale. Take Rita, which is available on Netflix, about a sharp-tongued schoolteacher prone to smoking in the bathroom and talking back to nagging parents. It’s the kind of show more at home on FX than Fox thanks to a heaping helping of strong language and sex. And yet it’s also about teachers in an elementary school, which somehow works.

This Danish comedy is boosted by the performance of Mille Dinesen as Rita, who balances her nonconformity with a warm heart for those around her. Ultimately the show is about a parent who needs to grow up as she’s also raising her own kids, which isn’t the kind of premise that often stands out, but it’s the performances and writing here that elevate the series.

This Belgian French-language crime thriller is based loosely on real events, which gives the story some weight but also gives U.S. audiences the bonus of not really knowing how those real events played out. Convicted serial child killer Guy Béranger has just been released after serving 20 years in prison. Because his case is nationally known, he’s taken to a remote monastery where he’s expected to live out his days. Police officer Chloe Muller, who has her own childhood demons, is assigned to make sure nothing happens to him and he does nothing to anyone else. However, when a girl from the local town goes missing, everyone’s fears materialized in ways that affect the entire community.

This series, which is available on Amazon, has received critical acclaim and won major awards en route to American TV screens. A tight crime mystery in the vein of so many others that have gained popularity, it stands out thanks to strong performances (including a very creepy one at the center of it all) and a mystery you actually want to figure out.