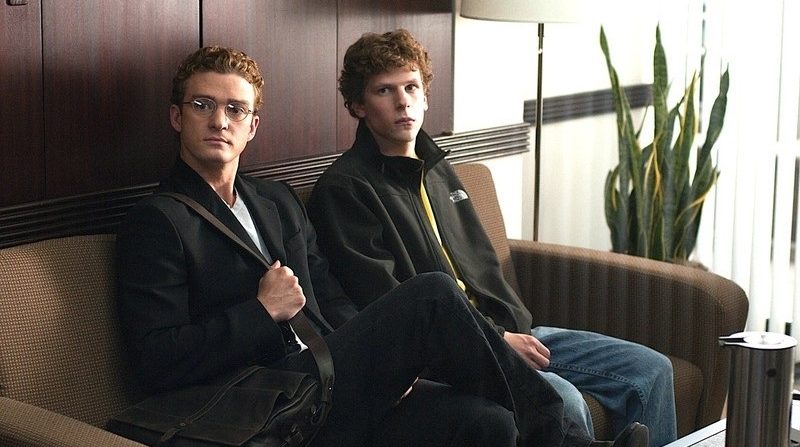 What does it take to be a success? Talent, inspiration, persistence, and considerable luck. Ruthlessness, backstabbing, and ego can factor in too. As the tagline says: “You don’t get to 500 million friends without making a few enemies.”

Happy 10th anniversary to The Social Network, which was released October 1, 2010. This tale about the creation of Facebook features one of the great filmmaking tag teams of all-time: director David Fincher and screenwriter Aaron Sorkin.

If this dynamic duo made a movie about the first washing machine, it would be fabulous. In the hands of lesser talents, a Facebook film could have easily been a dreadfully dull account of computer coding and lawsuits.

Fincher and Sorkin are fundamentally incapable of making anything boring. The Social Network’s riveting narrative bursts with energy, humor, and swagger. It exceeded lofty expectations to become one of the best films of its decade.

The Social Network seems more relevant now given what Facebook is today. Social media is virtually inescapable. Even if you aren’t on Facebook, it plays a significant role in the world we live.

When the movie was released, Facebook had 500 million members. Today, it has 2.7 billion users worldwide and is worth $720 billion. Zuckerberg, who created Facebook in his Harvard University dorm in 2004, is one of the richest people on the planet at $100 billion.

This story is about more than money. Facebook has affected how we consume information about everything from family members and friends to elections. It has shaped how we perceive the world around us. For better and worse.

The Social Network wasn’t intended to be an historical account. (No, Zuckerberg did not start Facebook due to a bad breakup with a girlfriend). This was Fincher and Sorkin’s artistic interpretation of events. Creative liberties were taken.

Before The Social Network, Fincher was already an auteur known for Se7en (1995) and Fight Club (1999). He had just made The Curious Case of Benjamin Button (2008), his biggest financial hit to date ($127.5 million domestically), which earned him his first Oscar nomination for Best Director. Sorkin, considered by many to be Hollywood’s most gifted screenwriter, was known for penning A Few Good Men (1992) and creating the television show The West Wing (1999-2006).

Great movies start with great source material. Fincher and Sorkin used the book The Accidental Billionaires by Ben Mezrich as a foundation. The exposé wasn’t actually finished when Sorkin started writing his screenplay based on a 14-page book proposal by the author. Fincher and Sorkin threw in some if their own trademark touches and got stellar performances from the cast.

This movie could’ve gotten real dense real fast. Fincher and Sorkin smartly set the table with something everyone could relate to: a guy and a girl in a bar. Fincher loves uneasy conversations in dark rooms. Sorkin loves fast ping-pong dialogue.

Everything came together for a remarkable five-minute sequence.

At first, you think it’s just a couple having drinks. Soon you realize Zuckerberg’s girlfriend is dumping him. Eisenberg and Mara are fascinating in this extraordinary feat of verbal gymnastics. The conversation keeps building until it reaches its surprising conclusion.

Fincher, a perfectionist, is notorious for pushing actors to the limit with an unusually high number of takes. This one reportedly took 99. That’s extreme, but you can’t argue with the results. It’s one of the best opening scenes in film history.

In the movie version of this tale, the breakup plays a key role in the invention of Facebook. It leads him to hack Harvard’s computer network which leads to on-campus fame. That in turn leads to the creation of Facebook. Whose idea was it? The legal drama between Zuckerberg and Winklevoss twins was real. For the sake of the movie, who was right and who was wrong is a little murky, and doesn’t really matter.

The Social Network is about how one big idea can simultaneously bring people together and drive them apart. It cost Zuckerberg money (a $65 million settlement with the “Winklevii”), and friendship and money with his co-founder Eduardo Saverin.

The Social Network was a hit. With a budget of $40 million, it grossed $97 million domestically. It was nominated for eight Academy Awards, including Best Picture, Best Actor for Eisenberg, and Best Director. It won three: Best Adapted Screenplay, Best Original Score, and Best Film Editing. Sorkin was the biggest winner, earning his first Oscar.

Fincher, who remains the best director to never win an Oscar, was overlooked. The Social Network can make a strong case for film of the decade. His peer Quentin Tarantino called The Social Network “hands down” the top movie of the 2010s. Makes you wonder how the hell it lost Best Picture to The King’s Speech? #Groan

The legacy of The Social Network might be how this film shaped the public perception of Zuckerberg. Eisenberg’s portrayal is of an angry, arrogant, and awkward nerd. That’s probably unfair. Although, Zuckerberg isn’t helping himself with his unemotional and unusual appearances before Congress.

What did Zuckerberg think of The Social Network?

“They went out of their way in the movie to try to get some interesting details correct like the design of the office, he said. “but on the overarching plot … they just kind of made up a bunch of stuff that I found kind of hurtful.”

A lot has changed since 2010. Facebook is no longer “cool.” (Your grandparents are on Facebook). Younger generations have moved on Instagram, Snapchat, and TikTok. Also, Facebook has been perverted into a political weapon. It’s one of the worst perpetrators when it comes to spreading fake news, playing a role in the outcome of the 2016 presidential election.

All of this led to Sorkin acknowledging the possibility of a sequel to The Social Network.

MORE TO THE STORY: Aaron Sorkin says "The Social Network" producer Scott Rudin has reached out to him about revisiting the subject of #Facebook on film. pic.twitter.com/hE5iOwEik1

Fincher and Sorkin together again?!?

Shut up and take my money.

5. “I remember something about a trombone.”