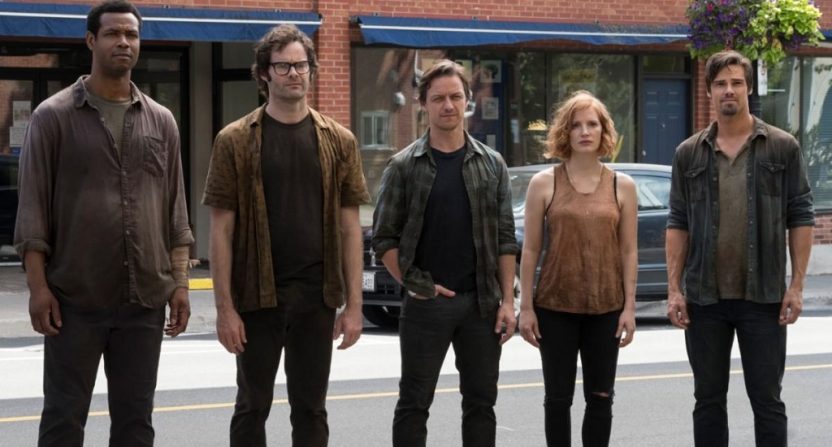 It Chapter Two was always going to be the hard part.

It (2017) was a delightful triumph: a fresh, funny, and tight Stephen King adaption. You loved the kids, and Pennywise the Clown was terrifying. It was a critical and commercial success largely due to focusing on the children. Their fears, their insecurities, and their camaraderie. The film with a $35 million budget made $327.48 million domestically to become the highest-grossing R-rated horror picture of all-time.

This got people excited for the sequel. Or at least optimistic that It Chapter Two would continue to be an improvement over the 1990 made-for-TV movie. Check out the 2019 cast, highlighted by A-listers Jessica Chastain, James McAvoy, and Bill Hader! They could make reading the dictionary interesting. They aren’t just stars, but accomplished actors: a two-time Oscars nominee (Chastain), a Golden Globe nominee (McAvoy), and an Emmy winner (Hader). Plus, this seemed like perfect casting as the 40-something version’s of the Losers’ Club.

Chastain seemed like a natural fit for the adult Beverly, forever haunted by an abusive father. The malleable McAvoy as Bill, still suffering lingering guilt over the death of his younger brother. And the funny Hader as Richie whose raunchy humor is masking a secret.

Toss in Bill Skarsgård’s repeat performance as Pennywise and Andy Muschietti’s direction, and It Chapter Two would surely be a slam dunk hit, right? Well, financially it probably will be. The movie has already grossed $91 million. However, that’s considerably less than the 2017 opening gross of $123.4 million.

Blame sequel fatigue if you want. But Dark Phoenix and Men in Black: International likely underperformed because they weren’t good films. Blame the unrealistic expectations. It Chapter Two is a bloated and meandering disappointment simply because it’s not as compelling as the first chapter. The adults aren’t nearly as interesting as the kids.

If you’re going to make a nearly three-hour movie, you must sustain an engaging narrative. The runtime of It (2017) is 2 hours, 26 minutes. It feels brisk because it’s captivating to see the kids reveal their problems while also experiencing the joys of being children during summertime. You see them grow and learn while battling Pennywise. Add in some well-timed comic relief, and it’s easy to see why this movie was such a hit.

It Chapter Two slogs on as if the film doesn’t quite know what to do with the characters. The opening scene when we’re re-introduced to Pennywise is an interesting choice. While it eventually does pay off for an important plot point, a casual viewer could easily miss overlook the significance. (The scene with the little girl with the birthmark might have been a better choice as an opener).

After the return of Pennywise from his 27-year slumber is established, it’s time to get the gang back together. Calls from Mike (Isaiah Mustafa) go out to the other six members of the Losers’ Club. Mike is the only one still residing in the small Maine town of Derry. Once these Horror Movie Avengers are assembled, that’s when the movie starts to have problems.

Cue the flashbacks, a few recycled jokes, and Pennywise encounters. Instead of the Losers’ Club immediately confronting the evil clown as a unit, they disperse to complete individual errands that slow everything down.

Too many unnecessary scenes make this movie feel four hours long. Only a few truly resonate. The first is Beverly returning to her childhood home (but the trailer pretty much tells you everything you need to know). The second is totally unexpected and effective: Richie revisiting the old arcade. You learn a lot more about the character than what was disclosed in the first Chapter.

Following the success of the 2017 film, the two most obvious contenders to star in the sequel were Chastain and Hader. In It Chapter Two, Chastain is solid, but the best overall performance belongs to Hader. He’s always been hilarious. We’ve seen his acting chops in Barry, for which he won an Emmy, and The Skeleton Twins.

The young Richie (Finn Wolfhard) was comic relief. The grown-up Richie is a little more complicated. Hader successfully walks the delicate balance of being funny but also being vulnerable. He does his best to elevate It Chapter Two. Apparently – and not surprisingly – Hader improvised some of his jokes. Some of the best parts feature verbal jousting between Richie and Eddie (James Ransone), and the seemingly endless parade of “mom” jokes.

The movie never directly unveils Hader’s secret, but you can figure it out.

But some of the other adults seem underdeveloped. For example, Ben (Jay Ryan) is no longer an overweight child, but a hunky and handsome architect. That’s about it. And Mike is basically used as exposition.

When the group finally confronts Pennywise, the climax drags on and on. It feels like bonus footage from an extended director’s cut. One running joke throughout the film is that Bill, now an author, is criticized because of his endings. It’s a playoff nod to what King has dealt with.

According to Jake Kerridge in THE TELEGRAPH, I can't write a good ending to save my life. If my life was at stake, I probably could. I'd just double space and write, "To his relief, he woke up and discovered it was all a dream." That would probably work.

It Chapter Two could have used a better ending.